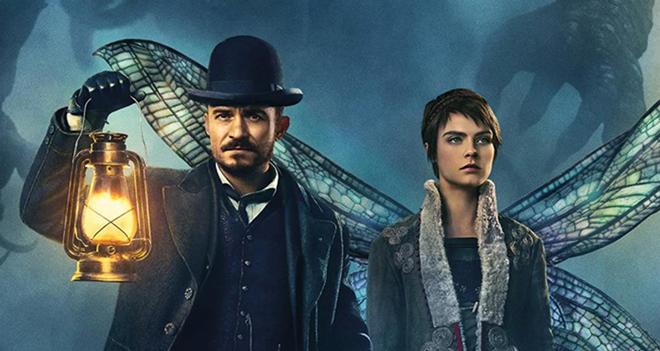 Netflix, Amazon Prime Video, CBS All Access, Hulu, and DC Universe have all released new previews and info for several of their upcoming shows and films.

Carnival Row (Amazon Prime Video, August 30) - Orlando Bloom and Cara Delevingne star in Carnival Row, a Victorian fantasy world filled with mythological immigrant creatures. Feared by humans, they are forbidden to live, love, or fly with freedom. But even in darkness, hope lives, as a human detective and a faerie rekindle a dangerous affair. The city’s uneasy peace collapses when a string of murders reveals a monster no one could imagine.

Happy Jail (Netflix, August 14) - This five-part docu-series goes inside the Cebu Provincial Detention and Rehabilitation Center (CPDRC), a unique Philippine jail where dancing is part of the inmates’ exercise and rehabilitation. CPDRC shot to worldwide fame when its 2007 performance of "Thriller" went viral, but ten years later it faces intense scrutiny when an ex-convict is hired to run it. Happy Jail is directed by Emmy Award winner Michele Josue (Matt Shepard Is a Friend of Mine).

Green Frontier (Netflix, August 16) - Deep in the Amazon, on the border between Brazil and Colombia, a series of bizarre deaths are investigated by a young female detective, Helena. Soon it becomes clear that the murders are not the biggest mystery...but there are some secrets that are better kept in the jungle.

Love Alarm (Netflix, August 22) - In a world where an app alerts people if someone in the vicinity likes them, Kim Jojo experiences young love while coping with personal adversities. Starring Kim So-hyun, Jung Ga-ram, and Song Kang. Created by Lee Na-jeong, Lee Ayoun, and Seo Bora.

Elite: Season 2 (Netflix, September 6) - Las Encinas, the best and most exclusive school in Spain where the elite send their children to study, is also where three working class kids have just been admitted after their academy was destroyed by an earthquake and the local council divided up the students between the different schools in the area. The clash between those who have everything and those who have nothing to lose creates the perfect storm that ultimately ends in a murder. Who is behind the crime?

Why Women Kill (CBS All Access, August 15) - Details the lives of three women living in three different decades: a housewife in the '60s, a socialite in the '80s, and a lawyer in 2019, each dealing with infidelity in their marriages. The series will examine how the roles of women have changed, but how their reaction to betrayal... has not. Why Women Kill stars Lucy Liu, Ginnifer Goodwin, and Kirby Howell-Baptiste alongside Jack Davenport, Sam Jaeger, Reid Scott, Alexandra Daddario, and Sadie Calvano. The series is produced by Imagine Television Studios and CBS Television Studios. Creator Marc Cherry serves as executive producer alongside Imagine's Brian Grazer and Francie Calfo and Acme Productions' Michael Hanel and Mindy Schultheis. Marc Webb also serves as executive producer and directed the series premiere as well as two additional episodes.

Untouchable (Hulu, September 2) - The inside story of the rise and fall of Harvey Weinstein reveals how, over decades, he acquires and protects his power even as scandal threatens to engulf him. Former colleagues and accusers detail the method and consequences of his alleged abuse, hoping for justice and to inspire change.

Wu-Tang: An American Saga (Hulu, September 4) - Inspired by "The Wu-Tang Manual" and "Tao of Wu", and based on the true story of the Wu-Tang Clan. Set in early '90s New York at the height of the crack cocaine epidemic, the show tracks the Clan's formation, a vision of Bobby Diggs aka The RZA, who unites the men torn between music and crime but eventually rise to become the unlikeliest of American success stories.

Titans: Season 2 (DC Universe, September 6) - From executive producers Akiva Goldsman, Geoff Johns, and Greg Berlanti, Titans follows a group of young soon-to-be Super Heroes recruited from every corner of the DC Universe. In this action-packed series, Dick Grayson emerges from the shadows to become leader of a fearless band of new heroes, including Starfire, Beast Boy, Raven and others.

- A current DC Universe subscription costs $8 per month or $75 per year.