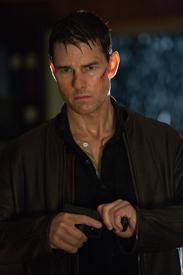 Last month we spotlighted an unconventional romance, a revisionist "spaghetti southern," and a harrowing story about familial bonds and hope. If you haven't already, be sure to check out the Essential Picks for November, December, January, February, March, and April.

This month, we're covering a well crafted Hollywood action thriller, a spooky contemporary horror flick, and an esoteric excursion into experimental science fiction. Please be aware, that if you haven't already seen them, there might be some spoilers for the films listed.

If you can only buy three titles that hit Blu-ray in May, here's what we suggest you pick up, starting with the most essential...


'Jack Reacher' - Despite the genre's many formulaic conventions, there is a real underappreciated art to creating a genuinely engaging action thriller. With 'Jack Reacher,' writer/director Christopher McQuarrie has demonstrated a true mastery of this increasingly neglected craft. Exciting, entertaining, and surprisingly engrossing, the Tom Cruise starring vehicle is a damn fine piece of Hollywood moviemaking that draws you into its story through solid scripting, carefully staged visuals, and a charismatic lead performance.

After a powerfully unsettling, dialogue free and economically constructed opening, McQuarrie perfectly establishes the film's escalating mystery, fueling anticipation for Reacher's inevitable introduction. Spoken of like a ghost, the man is built up to almost impossible levels, and when he finally does appear on screen his initially effortless, nearly anticlimactic arrival only serves to enhance the character's mystique. And as we get to know him more and more, Cruise goes on to paint the portrait of a classic silver screen badass full of tough-guy wit and a sizzling larger-than-life presence. He's moral, determined, deadly, and more than a little bit smug, and despite having played many different variations of similar characters in the past, Cruise actually seems to be reinvigorated by the role, bringing a sense of concentrated personality and enthusiasm that has been missing from some of his other recent outings. Reacher is the kind of mythic motion picture hero that can not only boast about his incredible skills but actually back them up. In fact, his bite might be even worse than his already intimidating bark.

Mixing elements of a high-stakes procedural with bombastic Hollywood spectacle, the filmmakers weave a thoroughly engaging conspiracy that balances investigative plot twists with intense set pieces. Hand-to-hand brawls, shootouts, and a particularly thrilling car chase are all brought to the screen with a real eye for pulse-pounding visuals and an impressive sense of pace and cinematic grammar. The plot itself does get rather convoluted in the third act, but that's par for the course for this type of storytelling, and the execution remains exhilarating throughout. Throw in an icy cool villain played perfectly by legendary German director and apparent superhero, Werner Herzog, and it all simply adds up to a recipe for big screen awesomeness. Though the movie garnered some mixed critical reactions and wasn't a huge box office success, I was really pleasantly surprised by how much I enjoyed it, especially considering how terrible many similar efforts have panned out in recent years (this is the movie 'Alex Cross' wishes it could be). This Blu-ray disc from Paramount is absolutely incredible, with truly jaw-dropping video, room shaking audio, and a welcome assortment of bonus features. With its broad appeal, demo worthy technical presentation, and commendable ability to channel Cruise's trademark obnoxious persona into something genuinely charismatic, the film squeaks by the competition to take the top spot on May's must own list.


'Mama' - "Once upon a time." That's how director Andrés Muschietti decides to open his spooky horror tale 'Mama,' and really, I can't think of a more appropriate introduction. A dark, contemporary fable about motherhood and devastating trauma, the Guillermo del Toro produced ghost story is creepy in all the right ways. Staying true to the classic elements that make its genre so fun and affecting, the movie blends supernatural thrills with human drama, offering scares and genuine emotion in equal abundance.

Packed with eerie effects, flickering lights, creepy insects, frightening nightmares, disappearing reflections, creaking sounds, feral children, shadowy closets, spectral creatures, and requisite startling music cues, the film covers quite a bit of horror movie ground, following many tried-and-true conventions with just enough originality to make the execution memorable and distinct. Muschietti establishes the spooky premise well and gradually forms a solid otherworldly mythology while maintaining a simple but effective emotional story beneath the paranormal thrills. As the supernatural happenings ramp up, the director stages his set pieces with thoughtful, multi-layered compositions, and shows us just the right amount of the title character, clearly making her threatening presence known while still leaving plenty to the audience's imagination. And even when the ghostly Mama is finally exposed in all her glory, the character still remains terrifying, revealing some wonderfully horrific design work. Perhaps even more disturbing than her distorted appearance, is her devastating weeping howl which might be one of the most unsettling sounds I've heard in quite some time.

Trading in her trademark red locks for short black hair, a punk rock demeanor, and prickly attitude, Jessica Chastain becomes a typical self-absorbed adult turned reluctant mother, fueling the movie's main narrative arc. Admittedly, it's not the most unique plot point, but the actress does a great job of selling the character's inevitable transformation, and the bond she slowly develops with her adopted children is ultimately powerful. The Kingslayer himself, Nikolaj Coster-Waldau, is also good in his somewhat marginalized role, and the two child actresses, Megan Charpentier and Isabelle Nélisse, are very impressive as the two young girls who were stranded in the woods and raised by… something. Their animalistic behavior is very disquieting and their torn loyalty and oscillating fear/affection for the creature that saved them is fascinating to watch. This complicated gray area tied to Mama's intentions and actions helps to enhance the film's themes and set it apart from many similar efforts.

While it might start with a classic fairy tale preamble, like any good horror story, there is no true "happily ever after" here -- at least, not in the traditional sense. With an ending that lingers long after the credits role, Muschietti succeeds in making us care for these characters, giving their triumphs and tragedies a lasting impression. There are occasional shades of an inferior movie peppered throughout the runtime, but the talented cast and strong visual direction end up elevating the material. A chilling and heartfelt horror flick, 'Mama' stands above its many underwhelming contemporaries, and coupled with great audio, video, and supplements, this disc easily earns a place among this month's essential picks.


'Upstream Color' - Though I love a well told traditional story as much as anybody, I'm also a huge fan of experimental forms of cinematic expression and/or narratives -- including the works of Stan Brakhage, Hollis Frampton, Maya Deren, Chris Marker, Alain Resnais, Luis Bunuel, David Lynch, Wong Kar-wai, and Terrence Malick. With that said, I can be oddly particular about what kinds of avant-garde efforts I end up connecting with, and under the wrong hands, "experimental" cinema can be just as guilty of being soulless and superficial as any standard Hollywood misfire. Instead of providing true substance, some of the art form's less successful endeavors simply mask a lack of vision or cohesion through empty oblique flourishes and tedious style. Shane Carruth's daring and hypnotic 'Upstream Color,' however, completely avoids any of these potential pitfalls. The long-awaited follow-up to the director's impressive debut feature, 'Primer,' the movie is an utterly intoxicating journey into filmic ambiguity that engages the viewer on all levels, offering a formalistically, intellectually, and emotionally stirring experience.

Awash in a glowing haze of dreamy visuals, the film's style is both free-flowing and tightly precise, mixing methodical construction with ethereal execution. Breaking traditional narrative conventions, Carruth eschews typical exposition in favor of something much less overt, revealing story beats in an almost subconscious manner. Traditional scenes where characters sit around and talk about their predicament, working through the plot for the audience's sake, are nearly nonexistent, forcing visceral experience to be our only window into the protagonists' world. Scenes will often cascade upon one another in isolated fragments, forming an escalating current of bending space and time. Through close-ups and meticulous camera movements, Carruth creates an almost unprecedented sense of texture, using sight and sound to convey the very touch of his images. Audio also plays an invaluable role in the overall mood and structure, bridging connections between characters and sequences through aural associations. Every element of filmmaking is used to its fullest, creating an experience that does not attempt replicate the tempo of reality, but instead engenders a cinematic language and rhythm all its own.

As esoteric as the presentation can be, there really is an intelligent and thought provoking story here, touching upon deep themes of control, exploitation, free will, identity, compulsion, human connection, and even love. Actress Amy Seimetz does an exceptional job of grounding the bizarre science fiction story in an affecting emotional space, and the central romance that develops at the core of the film is surprisingly resonant. Taken at face value, the plot really is quite strange, featuring mind control, parasite worms, and psychic connections to pigs, but as silly as some of that might sound, under Carruth's hands it becomes legitimately fascinating and, in its own way, believable. Showing us just enough (or sometimes just not enough), to connect with the narrative, the director's storytelling approach is deliberately vague but far from truly impenetrable. In fact, some elements of the plot are actually unexpectedly straightforward while others remain tantalizingly elusive. The actual form of the story's unconventional cinematic shape complements the script itself, fusing style and content in such an assured, effortless, and natural manner that the two essentially blur together.

Analytical but emotionally powerful, the film is experimental science fiction at its very best. It's certainly the least accessible title on this list, but the challenging experience is wholly rewarding. One of the most daring and hypnotically engrossing pictures I've seen all year, it's by far the month's most original release, and while it's demanding style won't be for everyone, it's an absolute must own for those open to alternative forms of visual storytelling.

So, there you have it. While there are many titles worth picking up this May, those are our top three must own recommendations. We'll be back next month with three more essential picks, but for now, what do you think of our selection? What are your choices for May's must own titles?