Owen Wilson and Pierce Brosnan star in 'No Escape'. On Blu-ray Next Month

In an early announcement to retailers, Starz/Anchor Bay is preparing to release 'No Escape' on Blu-ray on November 24.

NO ESCAPE centers on an American businessman (Wilson) as he and his family settle into their new home in Southeast Asia. Suddenly finding themselves in the middle of a violent political uprising, they must frantically look for a safe escape as rebels mercilessly attack the city.

You can find the latest specs for 'No Escape' linked from our Blu-ray Release Schedule, where it's indexed under November 24. 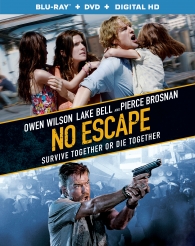