The comedic love story starring Rebecca Hall and Jason Sudeikis is planned for Blu-ray in April.

In an early announcement to retailers, Starz/Anchor Bay is working on 'Tumbledown' for Blu-ray April 5.

Pop culture scholar Andrew (Jason Sudeikis) comes to Maine to interview Hannah (Rebecca Hall), the protective widow of an acclaimed singer. When the unlikely pair strike a deal to co-write a biography, Andrew finds himself clashing with a cast of locals, including Hannah’s hunky suitor (Joe Manganiello), and her loving but defensive parents (Blythe Danner, Richard Masur). When Hannah and Andrew's stormy partnership blossoms into an unexpected connection, they face the possibility that the next chapter in their lives may involve each other. Dianna Argon and Griffin Dunne costar in this startlingly funny and sweetly romantic tale of moving on and finding love in the unlikeliest of places.

The Blu-ray will feature 1080p video, a lossless 5.1 soundtrack, and supplements include The Making of Tumbledown and The Music Behind Tumbledown.

You can find the latest specs for 'Tumbledown' linked from our Blu-ray Release Schedule, where it's indexed under April 5. 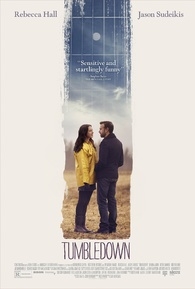