The wrath of Negan is already up for pre-order at Amazon.

As previously reported, Starz/Anchor Bay says 'The Walking Dead: The Complete Seventh Season' will be available on Blu-ray later this year, and now the date has been set for August 22.

Picking up immediately after the thrilling cliffhanger, Negan forces Rick and the group to fall under his will, brutally convincing them to live by his rules. To prevent further bloodshed, Rick genuinely believes they can make life under Negan, however terrible, work. But he soon learns that Negan can't be reasoned with, and they must prepare to go to war now. Victory will require more than Alexandria, and Rick will need to convince their new allies from the Kingdom and Hilltop to band together with the common goal of taking down Negan and his army.

You can find the latest specs for 'The Walking Dead: The Complete Seventh Season' linked from our Blu-ray Release Schedule, where it is indexed under August 22. 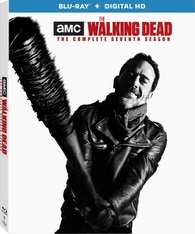