The documentary is now available for pre-order.

In an early announcement to retailers, Starz/Anchor Bay is preparing 'The Hunting Ground' for Blu-ray on December 1.

From the makers of 'The Invisible War' comes a startling exposé of sexual assault crimes on U.S. college campuses, their institutional cover-ups and the devastating toll they take on students and their families. Weaving together vérité footage and first person testimonies, the film follows the lives of several undergraduate assault survivors as they attempt to pursue - despite incredible push back, harassment and traumatic aftermath - both their education and justice.

Specs have not been detailed yet, but supplements will include Additional Stories and Q&A with Annie Clark and Andrea Pino.

You can find the latest specs for 'The Hunting Ground' linked from our Blu-ray Release Schedule, where it's indexed under December 1. 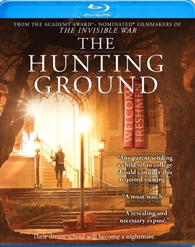 Discs mentioned in this article: (Click for specs and reviews)
The Hunting Ground (Blu-ray)