Negan is coming to Blu-ray this August.

In an early announcement to retailers, Starz/Anchor Bay will be releasing 'The Walking Dead: The Complete Sixth Season' on Blu-ray on August 23.

This past season brought many unforeseen, exciting and pulse-pounding twists and turns. With the end of every season comes the bittersweet knowledge that we must wait with bated breath until the next ride. To keep your “The Walking Dead” appetite satiated, Anchor Bay Entertainment proudly continues the tradition of offering fans an opportunity to relive the ever so satisfying and stirring sixth season.

Specs and supplements haven't been revealed yet, but the suggested list price for the Blu-ray is $79.99.

You can find the latest specs for 'The Walking Dead: The Complete Sixth Season' linked from our Blu-ray Release Schedule, where it is indexed under August 23. 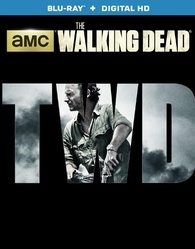