The western riding toward Blu-ray next month has now been fully detailed.

As previously reported, The Weinstein Company is preparing 'The Hateful Eight' for Blu-ray on March 15.

The Hateful 8 is set 6 or 8 or 12 years after the Civil War in wintery Wyoming, and a blizzard is coming.  Bounty Hunter John Ruth is trying to get his bounty, Ms. Daisy Domergue (Dah-mer-goo), to the town of Red Rock where she’s scheduled to be brought to justice.  Along the way he and his wagon driver Olie pick up two strangers; another bounty hunter and former union soldier, Major Marquis Warren, and a former southern renegade who claims to be the new mayor of Red Rock, Chris Mannix.  The impending storm has forced them to stop at Minnie’s Haberdashery, a stagecoach stopover on a mountain pass. When they arrive at Minnie’s, they are not greeted by the proprietor but by four strangers.  As the storm takes over the mountainside cabin our eight travelers come to learn they may not make it to Red Rock after all…

Ultra Panavision 70 is the very rare and exceptional format that Quentin Tarantino and his team used to shoot THE HATEFUL EIGHT, the widest 70mm theatrical release in twenty years. Panavision’s unique anamorphic camera lenses capture images on film in an incredible aspect ratio of 2.76:1. Almost all films seen today are shot in ratios of either 1.85:1 or 2.39:1. Simply put, Ultra Panavision 70 provides an amazingly wide and more detailed image.

"If you’re going to shoot your movie and release it in 70mm, it’s really the way to go," said Quentin Tarantino. "Twenty-four frames a second flickering through a projector, creating the illusion of movement.”

The Blu-ray combo pack will feature 1080p video, a lossless 5.1 soundtrack, and supplements include: Beyond the Eight: A Behind-the-Scenes Look; and Sam Jackson’s Guide to Glorious 70mm.

You can find the latest specs for 'The Hateful Eight' linked from our Blu-ray Release Schedule, where it's indexed under March 29th. 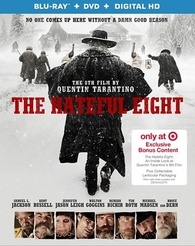