Michael Moore's 'Where to Invade Next' Bound for Blu-ray

The critically-acclaimed must-see documentary is headed for Blu-ray in May.

In an early announcement to retailers, Starz/Anchor Bay will be releasing 'Where to Invade Next' on Blu-ray on May 10.

Just when we need him most, America's favorite political provocateur, Michael Moore, brings us his latest award-winning film, Where to Invade Next. Honored by festivals and critics groups alike, Where to Invade Next is an expansive, hilarious, and subversive comedy/documentary in which the Academy Award®-winning director confronts the most pressing issues facing America today and finds solutions in the most unlikely places. The creator of Fahrenheit 9/11 and Bowling for Columbine has returned with an epic movie that’s unlike anything he has done before—an eye-opening call to arms to re-capture the American Dream and restore it to, of all places, America.

Writer, director and producer Michael Moore broke box office records with his first film Roger & Me in 1989, which gave birth to the modern-day documentary movement. Moore went on to break the documentary box office record two more times with his 2002 Academy Award®-winning film Bowling for Columbine and the Palme d'Or-winning Fahrenheit 9/11. Other notable films include the Oscar-nominated Sicko and Capitalism: A Love Story.

Specs and supplements haven't been revealed yet, but the suggested list price for the Blu-ray is $29.99.

You can find the latest specs for 'Where to Invade Next' linked from our Blu-ray Release Schedule, where it is indexed under May 10. 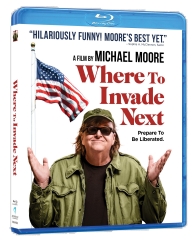