Director Justin Kurzel's adaptation of the Shakespeare classic is heading to Blu-ray in March.

In an early announcement to retailers, Starz/Anchor Bay is preparing 'Macbeth' for Blu-ray on March 8.

From the producers of The King's Speech comes the story of a fearless Scottish General, Macbeth (Academy Award© Nominee Michael Fassbender), whose ambitious wife (Academy Award © Winner Marion Cotillard*) urges him to use wicked means to gain power of the throne. A thrilling interpretation of one of Shakespeare's most famous and compelling characters, Macbeth is a dramatic re-imagining of the realities of war-torn times and a tale of all-consuming passion and ambition.

Specs have not been detailed yet, but supplements will include: Q&A with Michael Fassbender and "Making Macbeth" featurette.

Suggested list price for the Blu-ray/Digital HD combo pack is $26.99.

You can find the latest specs for 'Macbeth' linked from our Blu-ray Release Schedule, where it's indexed under March 8. 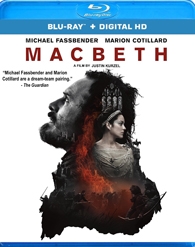 Discs mentioned in this article: (Click for specs and reviews)
Macbeth (2015) (Blu-ray)