Chris Evans' Directorial Debut 'Before We Go' Announced for Blu-ray

The romantic comedy will be available in stores in November.

In an early announcement to retailers, Starz/Anchor Bay is set to release 'Before We Go' on Blu-ray on November 3.

A young woman (Alice Eve) races to catch the 1:30 train out of New York City to New Haven. Stranded in the city after being robbed and missing her train, she meets street musician Nick Vaughan (Chris Evans) Starting as convenient acquaintances, the two soon grow into each other’s most trusted confidants when a night of unexpected adventure forces them to confront their fears and take control of their lives.

The Blu-ray will feature 1080p video, lossless 5.1 audio, and there doesn't appear to be any supplements.

You can find the latest specs for 'Before We Go' linked from our Blu-ray Release Schedule, where it is indexed under November 3. 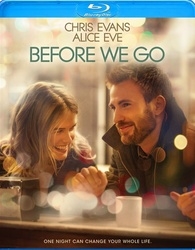