In an early announcement to retailers, Starz/Anchor Bay says 'Momentum' will arrive on Blu-ray on December 1.

When Alex (Olga Kurylenko), an infiltration expert with a secret past, accidentally reveals her identity during what should have been a routine heist, she quickly finds herself mixed up in a government conspiracy and entangled in a deadly game of cat-and-mouse with a master assassin (James Purefoy) and his team of killers. Armed with her own set of lethal skills, Alex looks to exact revenge for her murdered friends while uncovering the truth.

Specs and supplements have yet to be revealed, but suggested list price for the Blu-ray is $26.99.

You can find the latest specs for 'Momentum' linked from our Blu-ray Release Schedule, where it is indexed under December 1. 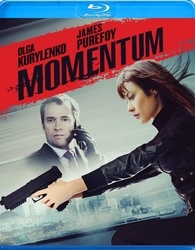