The horror/thriller starring Ethan Hawke and Emma Watson is headed for Blu-ray in May.

In an early announcement to retailers, Starz/Anchor Bay will be releasing 'Regression' on Blu-ray on May 10.

Minnesota, 1990. Detective Bruce Kenner (Ethan Hawke) investigates the case of young Angela (Emma Watson), who accuses her father, John Gray (David Dencik), of an unspeakable crime. When John unexpectedly and without recollection admits guilt, renowned psychologist Dr. Raines (David Thewlis) is brought in to help him relive his memories and what they discover unmasks a horrifying nationwide mystery.

You can find the latest specs for 'Regression' linked from our Blu-ray Release Schedule, where it is indexed under May 10. 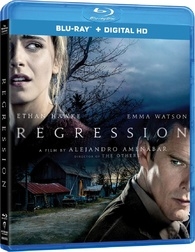