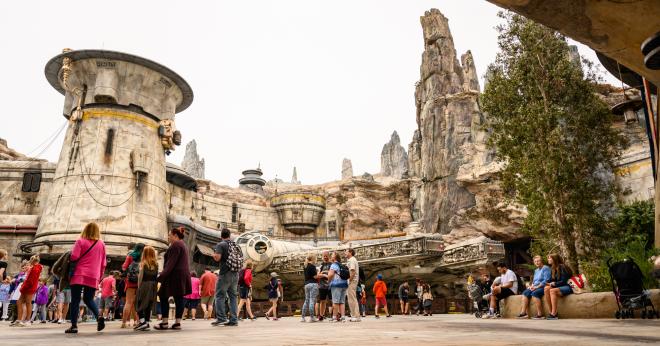 You will never find a more wretched hive of scum and villainy...

Obi Wan's words ring in my mind as I walk through the tunnel, transporting myself from a nostalgic incarnation of the American west into the remote space outpost of Batuu. Like many young people, I grew up wanting to run off with Luke Skywalker to far-off galaxies. To grab a drink in the Mos Eisley Cantina. To board the Millennium Falcon for adventures unknown. And today I'm finally doing those very things in a very real place. 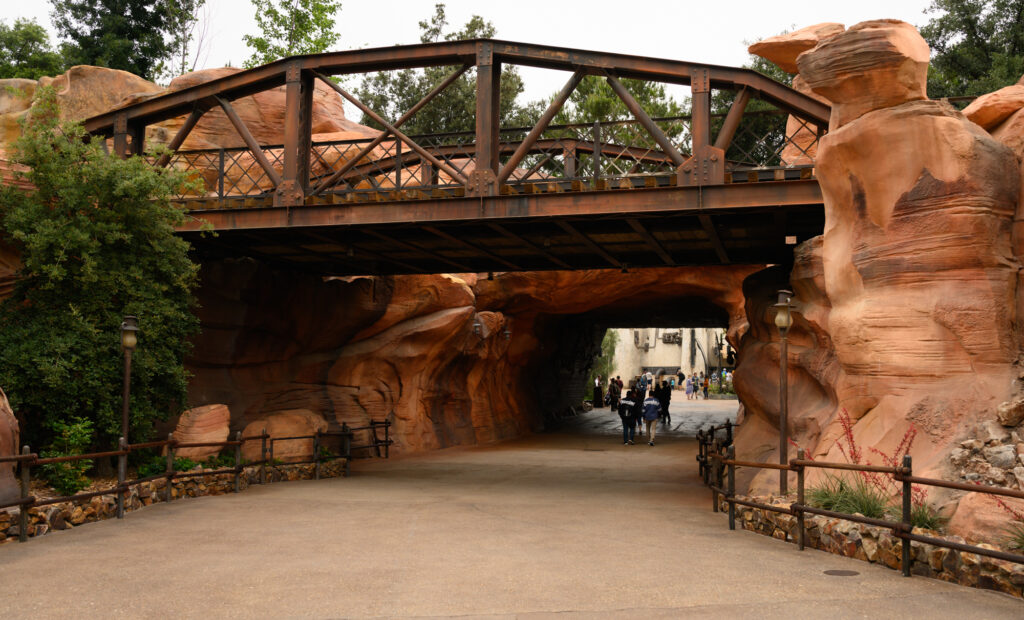 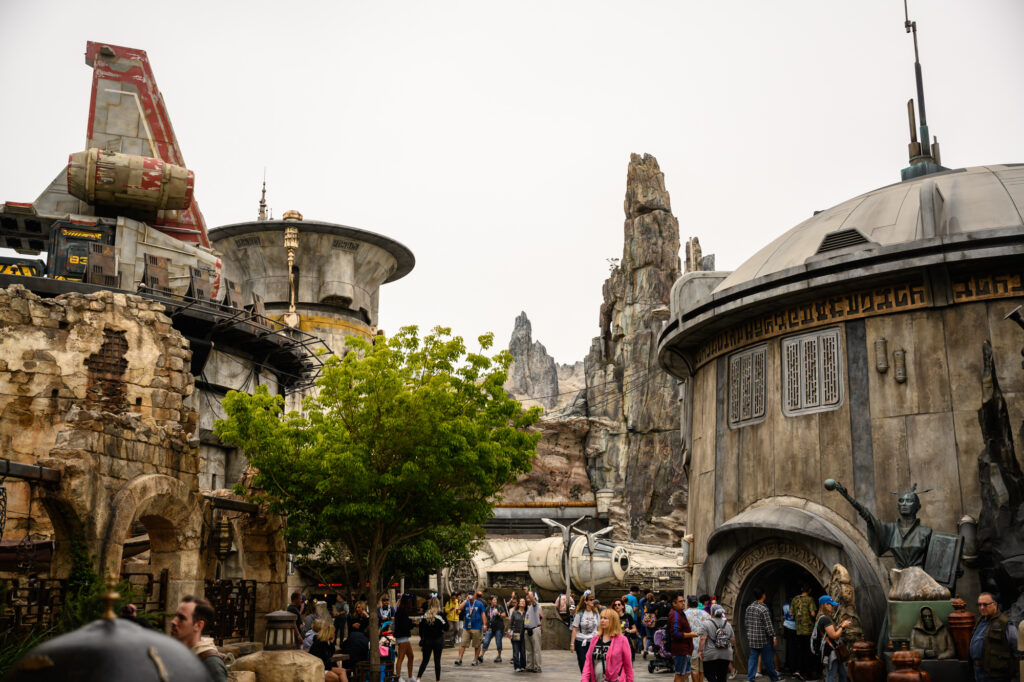 Welcome to Star Wars: Galaxy's Edge, Walt Disney's newest land, now open to the public at the Disneyland Resort in Anaheim, California. Yes, technically we're still waiting on a ride to open before it's finished, and if you're more of a Disney World vacationer, the Florida Galaxy's Edge won't launch until this fall. But if you're in Southern California this summer, you can walk yourself right into your favorite galaxy far, far away.

You can gobble the food, guzzle the drinks and, yes, even fly the Falcon with five of your best friends.

I took my family earlier this week and wanted to share a few first impressions. 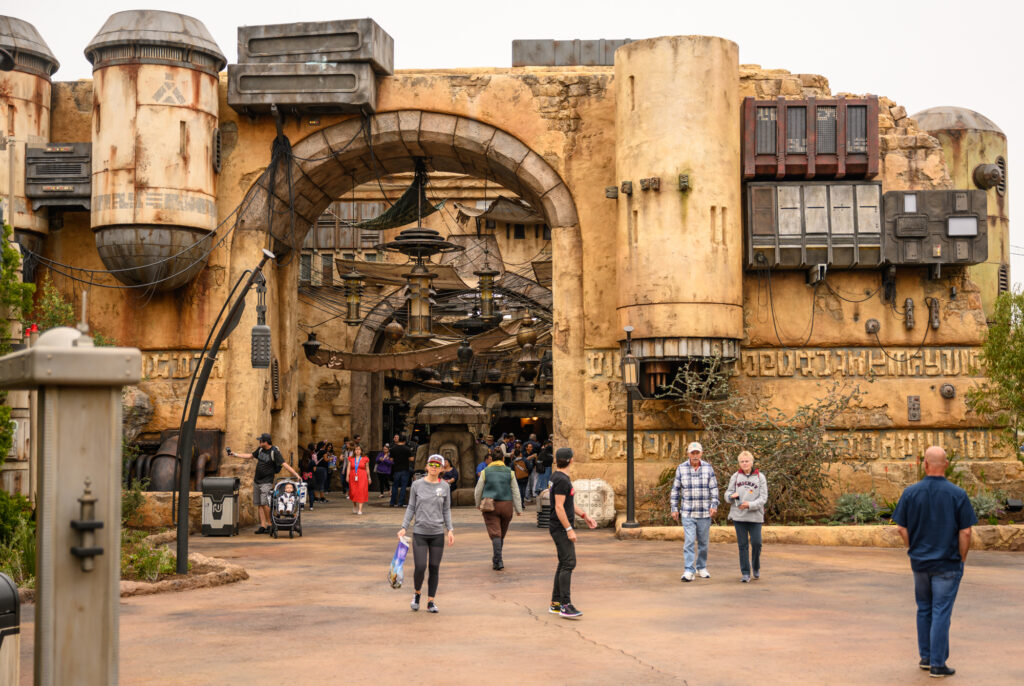 Walking from Frontierland into Star Wars: Galaxy's Edge literally takes my breath away. I've been excited to visit, but standing inside, fully immersed, is something different and special. I'm not watching a movie or reading a book. I don't have to imagine anything. It's all just... here. 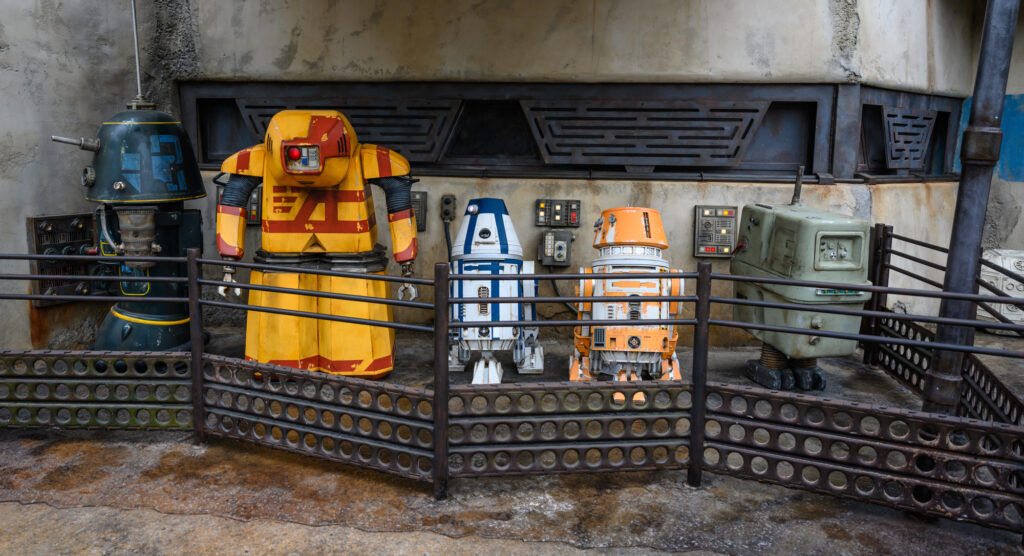 Check out these droids waiting for repair. Or the speeders at the mechanic shop. Here's a robot operating a massive barbecue grill at the local market. The First Order is here too, patrolling the city for the Resistance. Their red and black flags blazing symbols of fascist occupation. 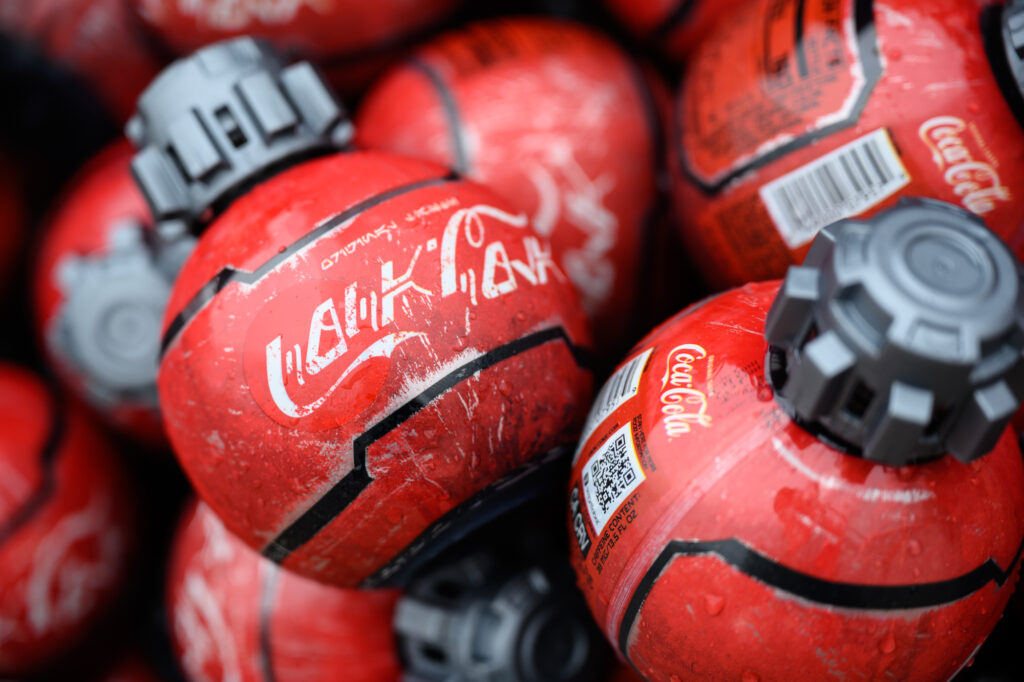 Part of me knows this is nothing but a (very fancy) mall designed to sell clothes and toys and food and drink -- this is the business of show, after all -- but the artistry and craftsmanship on display are extraordinary. Every single square inch of this place brims with story and (fabricated) history and I'm a sucker for it all. Even the bathrooms are beautiful.

It makes me forget I'm only a hundred meters away from a massive parking structure. 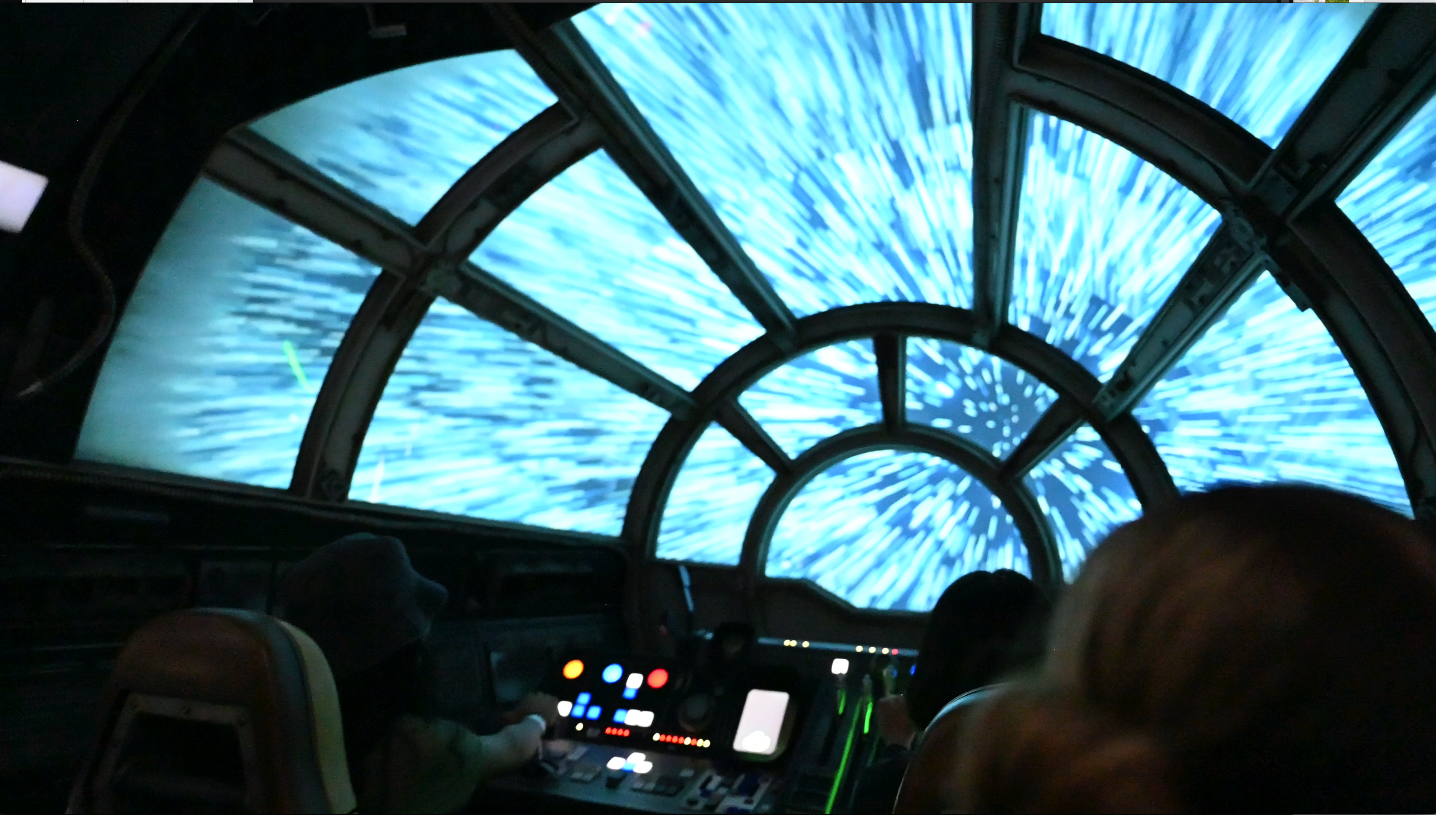 Galaxy's Edge will eventually have two major attractions. Unfortunately, Star Wars: Rise of the Resistance doesn't open until later this year, but know this much: Disney Imagineers called it the most epic attraction they've ever created. For context, I'd say Avatar: Flight of Passage is the most bonkers Disney ride available today, so I'm excited to see if Resistance meets or tops it. 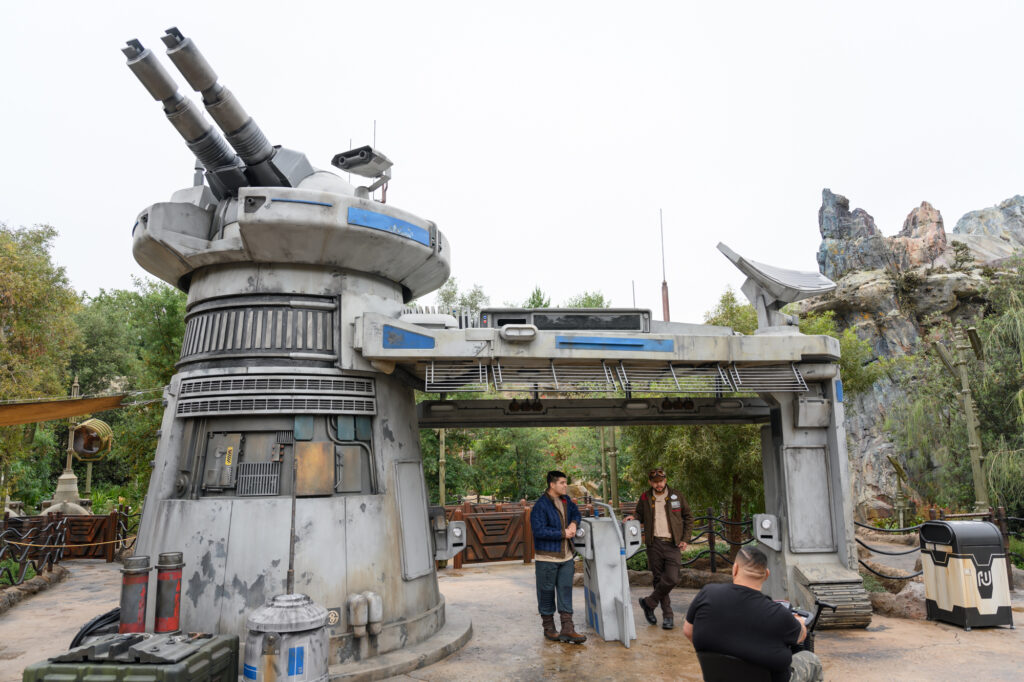 (Coming soon! Where You Will Wait)

For now, though, the only Galaxy's Edge attraction is Millennium Falcon: Smuggler's Run. Imagine Star Tours with six riders sitting in the Falcon's cockpit where two act as pilots, two play gunners, and two become engineers. That's right, you're not just riding along, you're interacting while being judged in the process and on your mission's success. 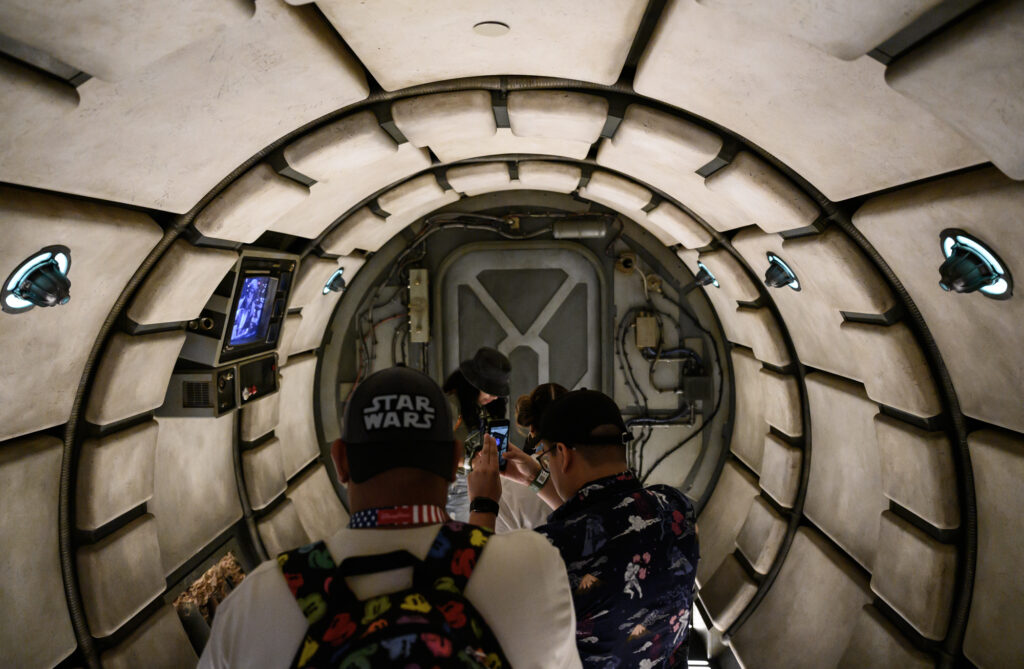 In my opinion, as a ride, Smuggler's Run is just okay. I'm not a big fan of Star Tours because it's less immersive as, say, an IMAX (which is why Flight of Passage is so impressive) or even a real rollercoaster. That said, I was an engineer, which involves pressing eight buttons as they light up, so maybe it's more fun when you're the pilot. The imagery was gorgeous, naturally, and the cockpit bounces and jounces and all those fun things. 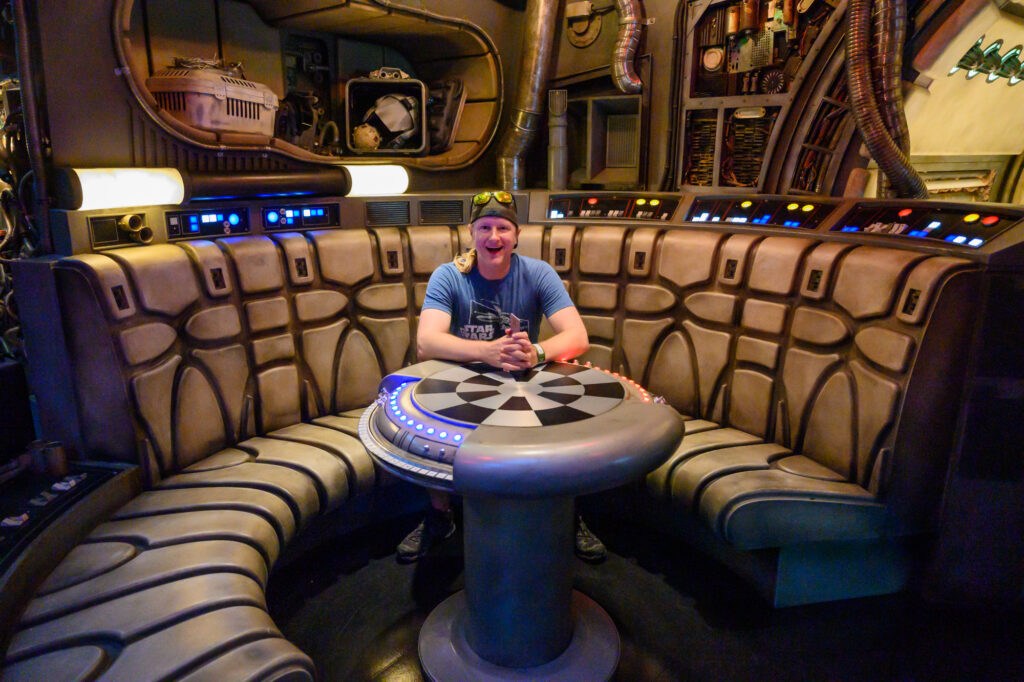 (I let the Wookie win)

To me, though, the most emotionally fulfilling part was simply being inside the Falcon's corridors. It's like walking into a favorite dream. Just like the city of Batuu, the precision and attention to detail are crazy-good. You can even sit at the infamous Dejarik board and get your picture taken while you wait for your mission. 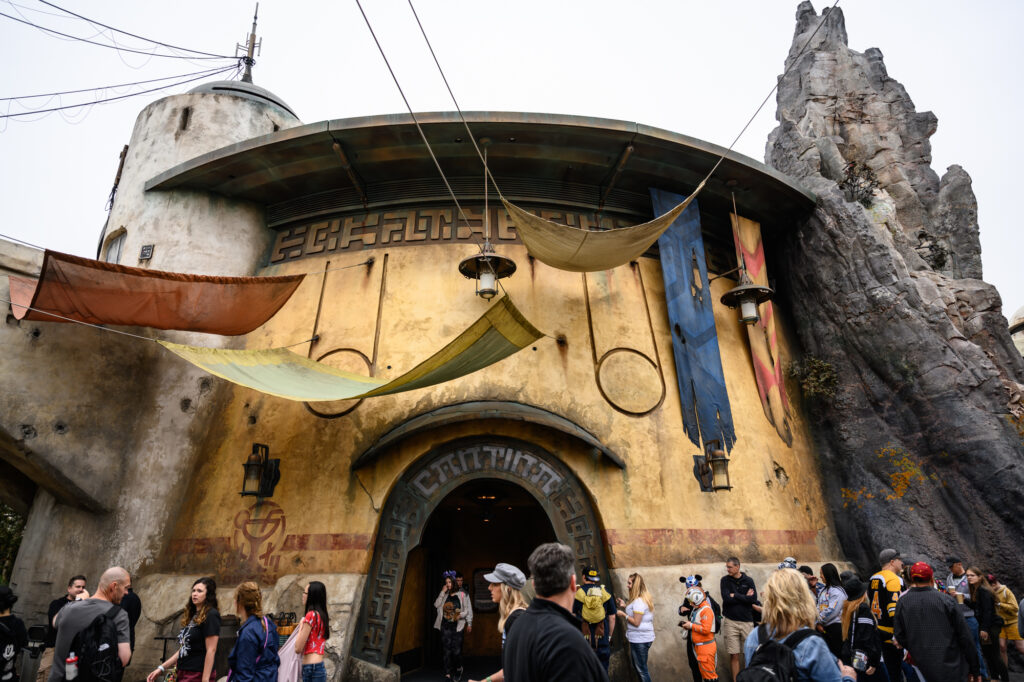 From portable food carts selling snacks and custom Coke bottles (see above) to space cocktails and desserts, there's plenty to drink and eat in Batuu. 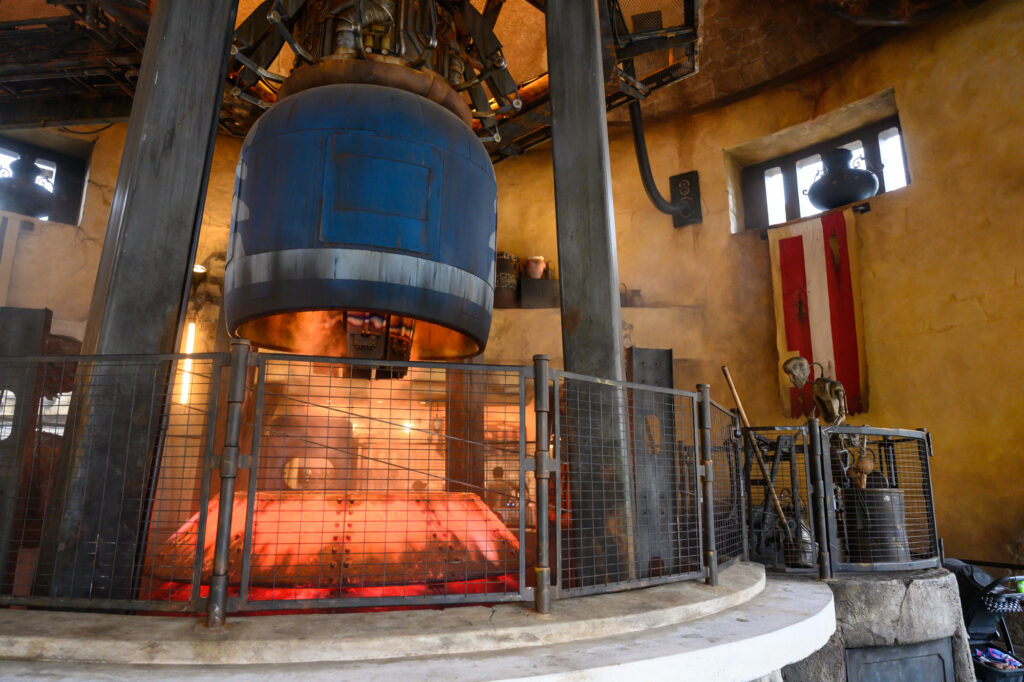 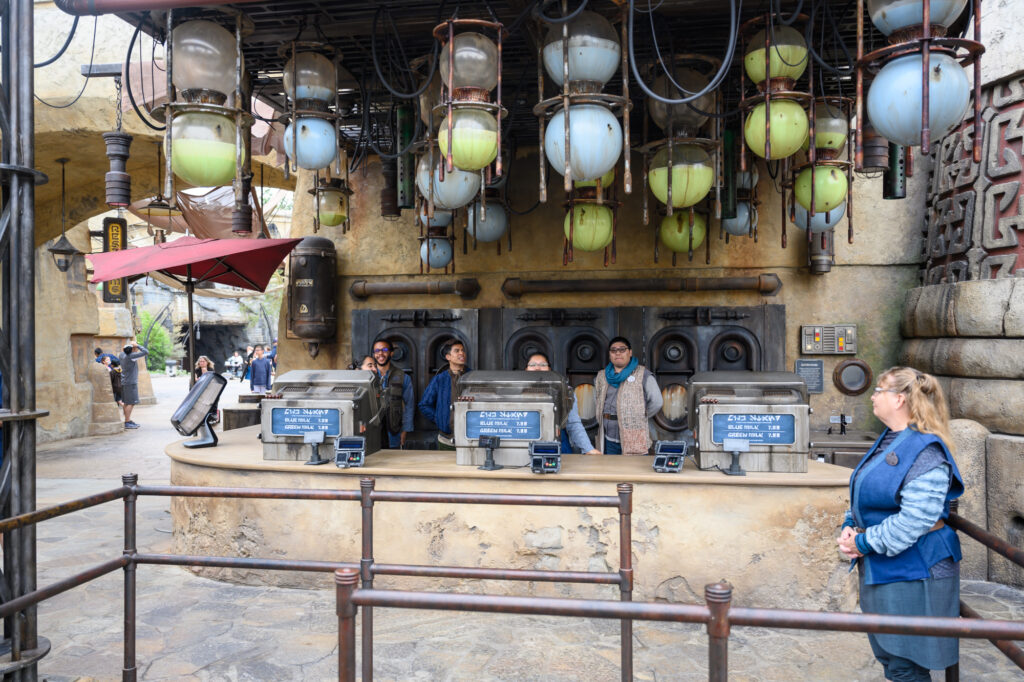 The Milk Stand offers both A New Hope inspired Blue Milk and The Last Jedi style Green Milk. But don't worry, you don't have to milk any sea cows to enjoy either wone. In fact, they're not actually milk at all. They're a frozen, fruity coconut/rice milk concoction more akin to a smoothie.

Docking Bay 7 Food and Cargo offers a variety of vegetarian and meat dishes, from salads and ribs to veggie loaf and beef pot roast. It's definitely the full dining experience in Galaxy's Edge but, alas, you can't enjoy your meal with a beer. 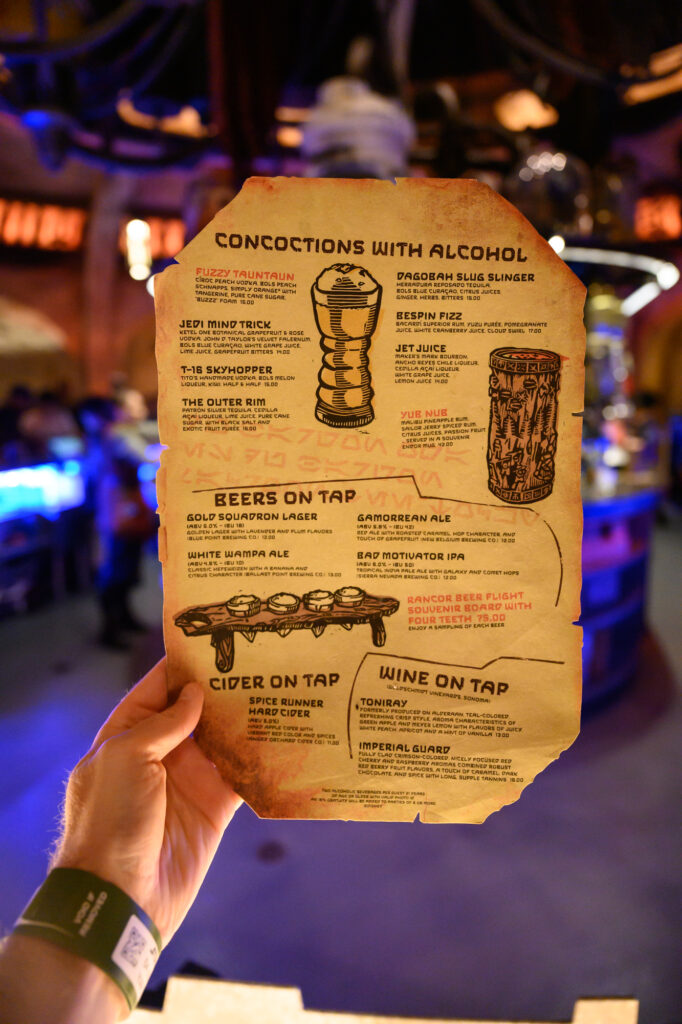 If you are craving an adult beverage, Oga's Cantina boasts a variety of space cocktails, bubbling virgin drinks for kids and teetotalers, and a few custom beers crafted by Blue Point, New Belgium, Ballast Point, and Sierra Nevada. The drinks and glassware are as visually interesting as the cantina itself, which is already the most popular attraction in Batuu. Is it worth the long wait? I think so. There are a few food snacks as well, but I would have liked to enjoy my Dagobah Slug Slinger and Gammorean Ale with something from Ronto Roasters. Oh well. 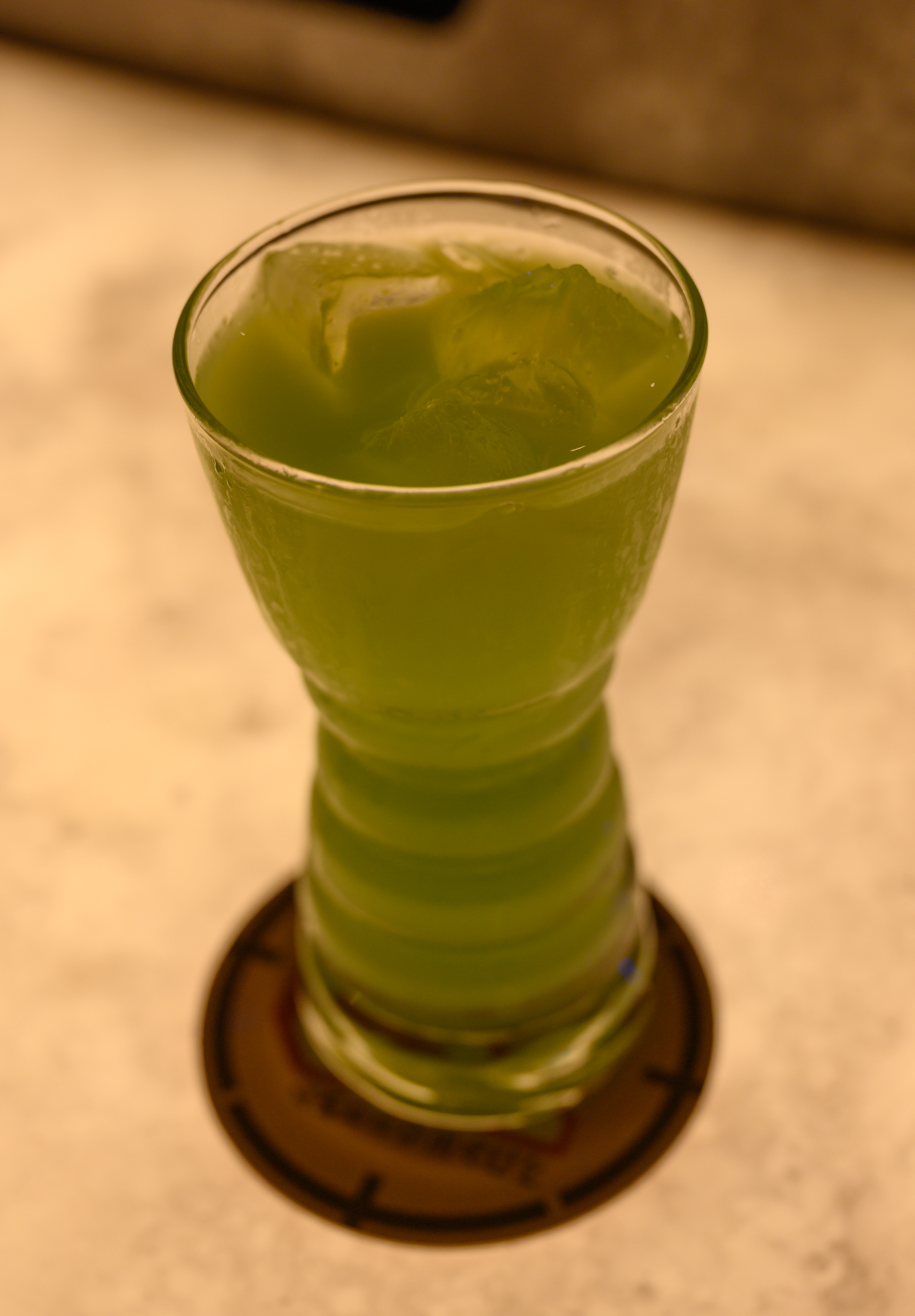 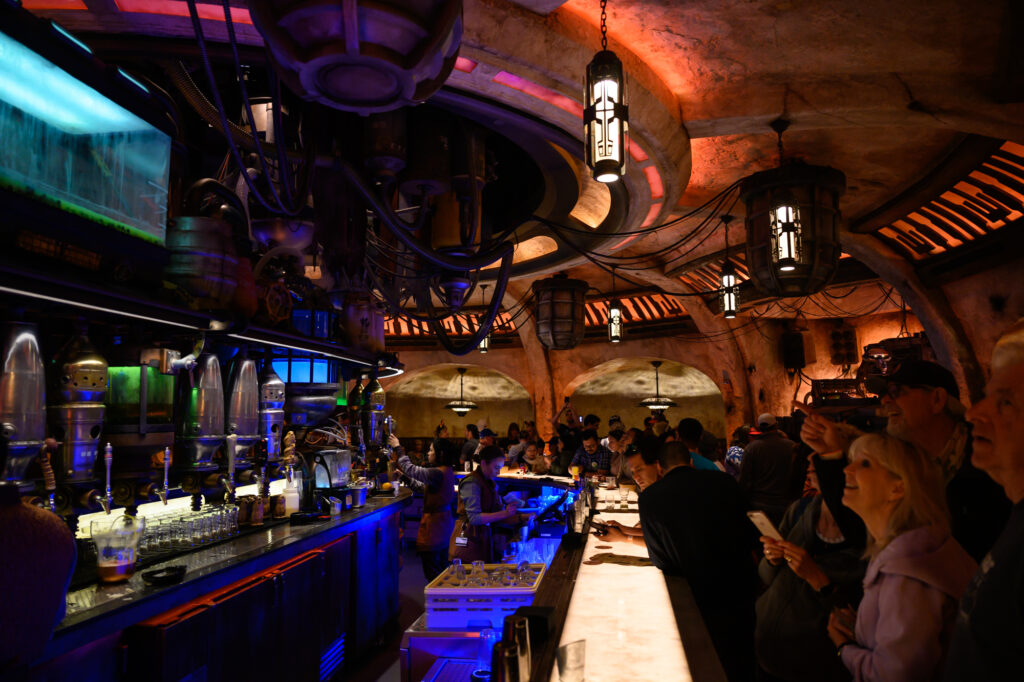 IMPORTANT TIP: space is limited. If you want to get a drink at Oga's Cantina, you need to register. My advice: find this line as soon as you enter Galaxy's Edge, then wander around waiting for them to text you. 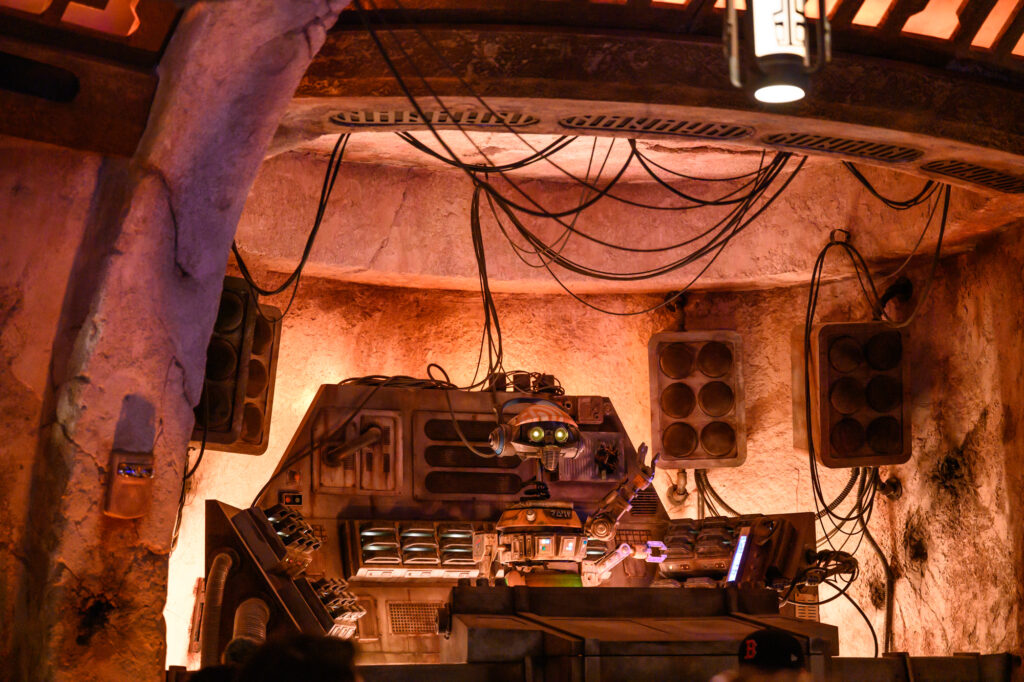 Choose Your Side, Your Droid, and Your Creature (Galaxy's Edge Merch)

Batuu feels like a city divided. It may be a remote outpost on the edge of the galaxy, but the First Order controls most of the city, from the spaceport to the market. But The Resistance is here too, just outside the market in the Old Outpost, an open space surrounded by canyon walls and desert plants. There's also a speeder and an X-wing Starfighter. 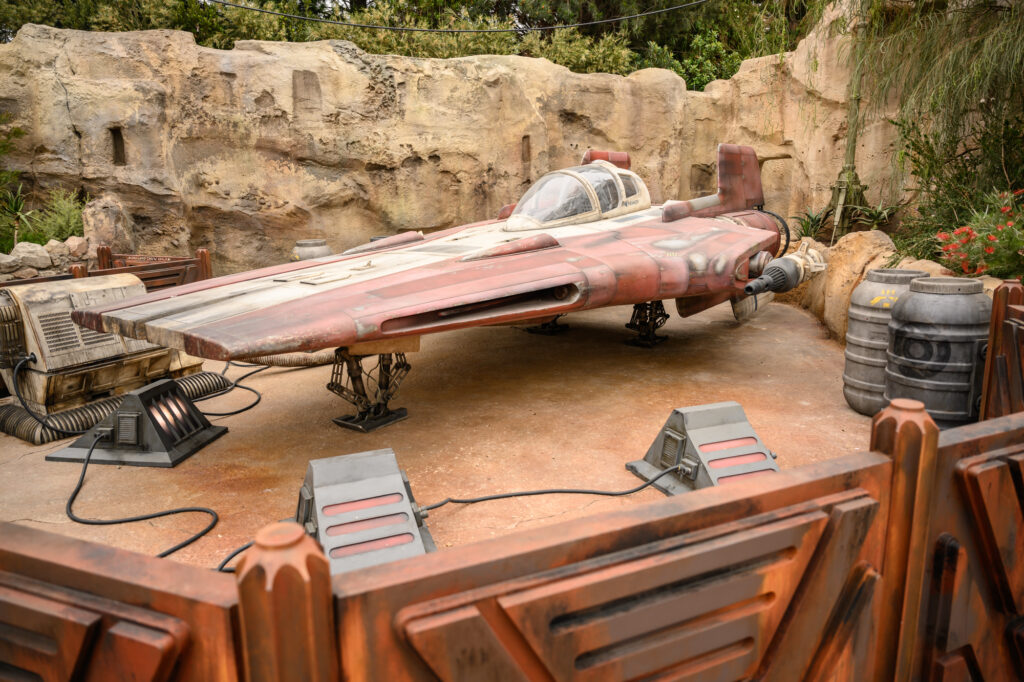 The point is, though, that Galaxy's Edge encourages guests to become heroes or villains or both. 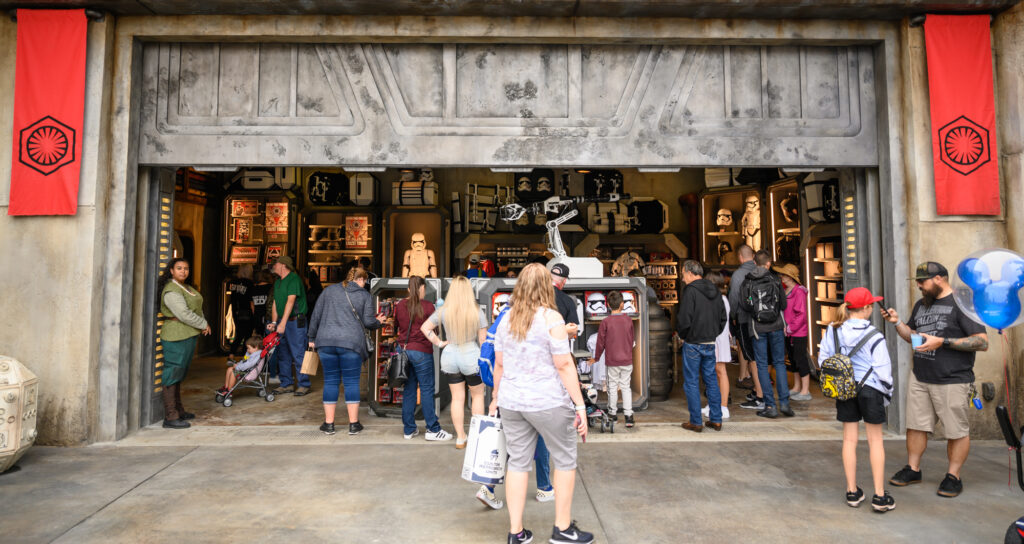 First Order Cargo is the place to get your stormtrooper uniforms and First Order enlistment posters. The store is metallic and clean (and a little fascist). 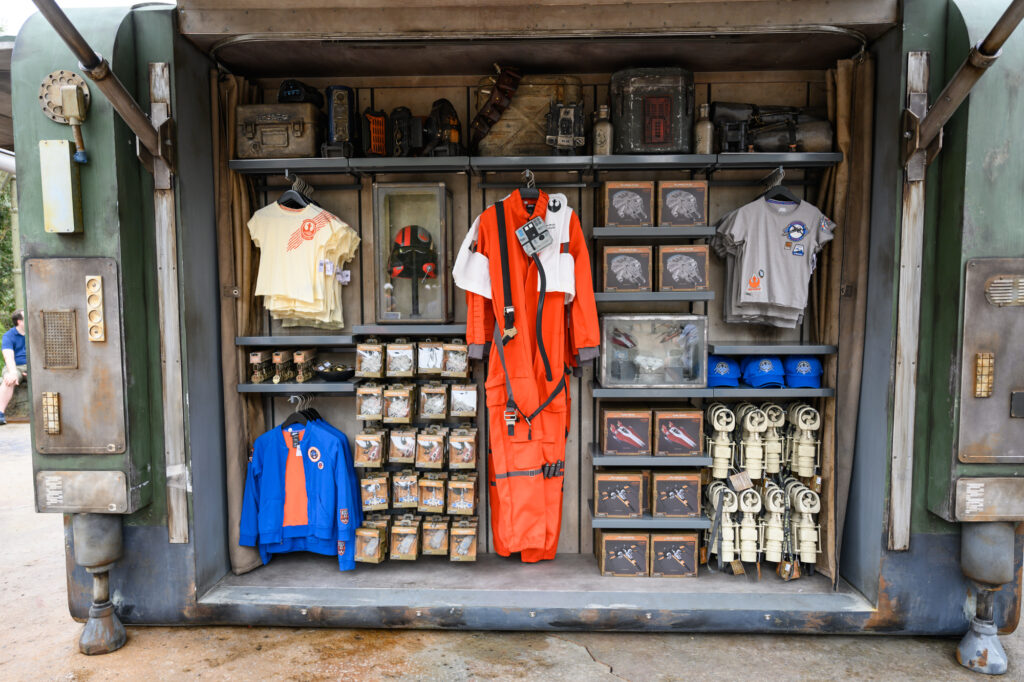 Meanwhile, Resistance Supply is the place to get your Resistance toys, t-shirts, and pilot uniforms & helmets. 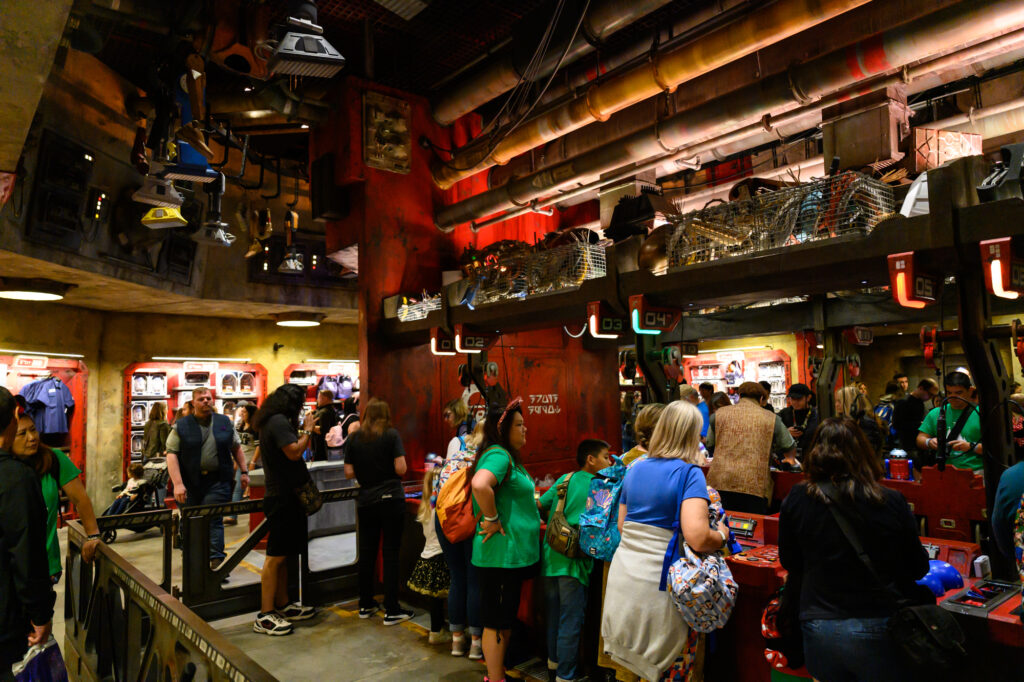 In the Droid Depot, you get to hand build your own robotic friend as parts appear on a conveyer belt reminiscent of modern Sushi restaurants. Here too you get to choose Resistance or First Order droids, or you can pick up a pre-assembled favorite, like R2D2 or BB8.

In Savi's Workshop, you get to make your own lightsaber (take that, Harry Potter wands!). 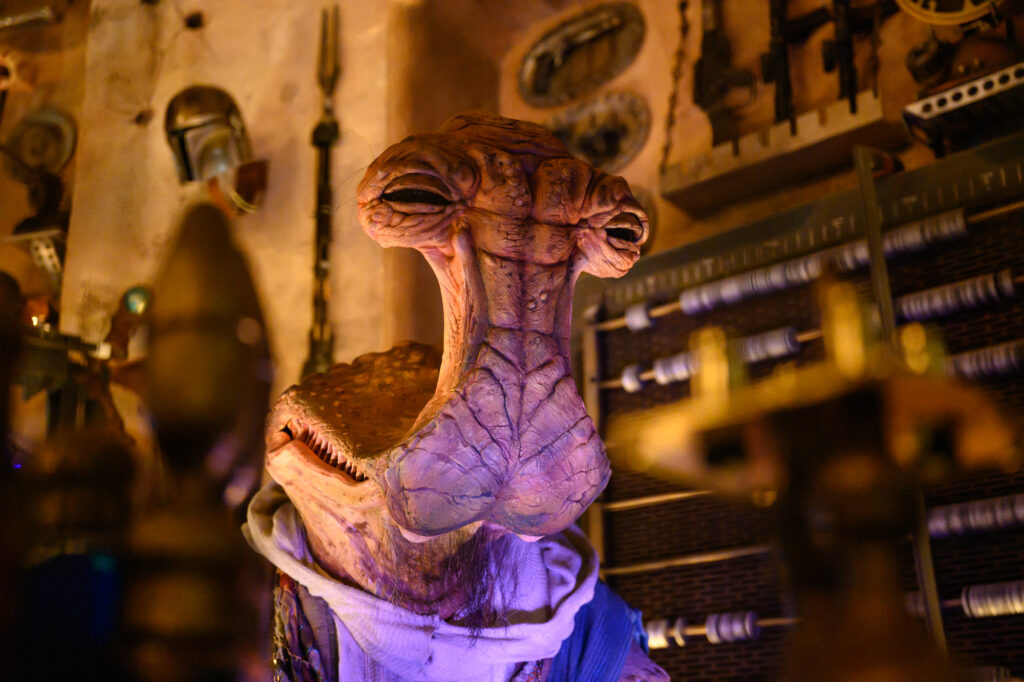 In Dok-Ondar's Den of Antiquities, your light vs dark side choices continue. With more stunning production design that includes the above creature, you can choose between blue Resistance artifacts and red First Order gear. 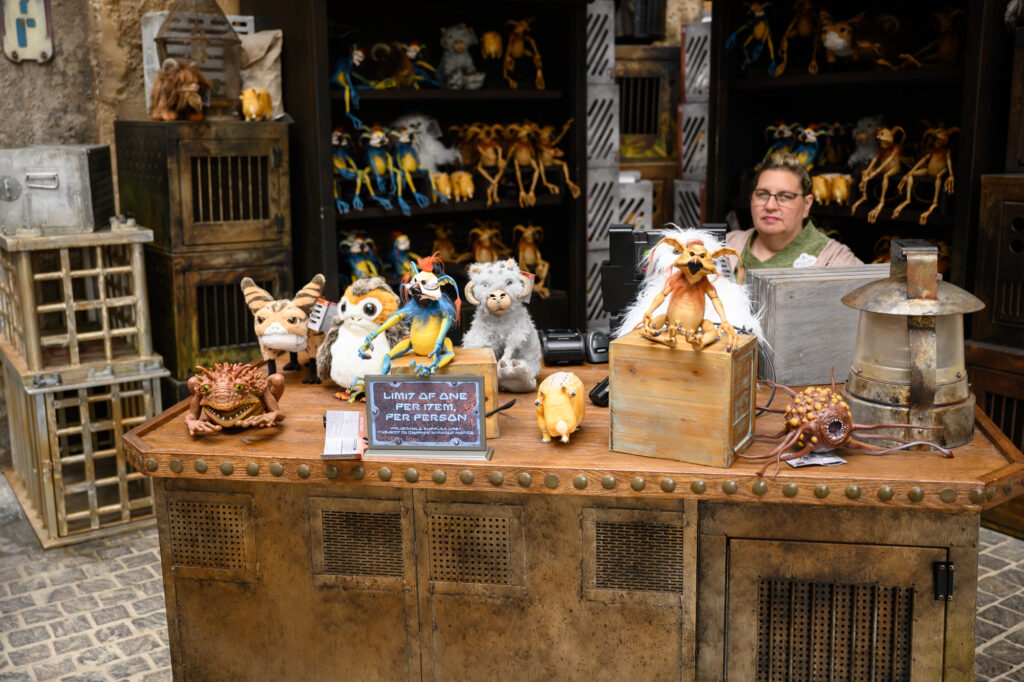 And lastly, over in the market, you'll find several more shops. The Creature Stall sells Kowakian monkey-lizards and other space pets. Black Spire Outfitters sells legitimately gorgeous Jedi-style robes. There are others, of course, but I started losing track.

Aside from the outrageous prices (make a budget and stick to it or face crushing debt!), what struck me most about the merchandise was the quality and variety. Each place you wander, you can buy cool "limited edition" Star Wars merchandise and memorability. 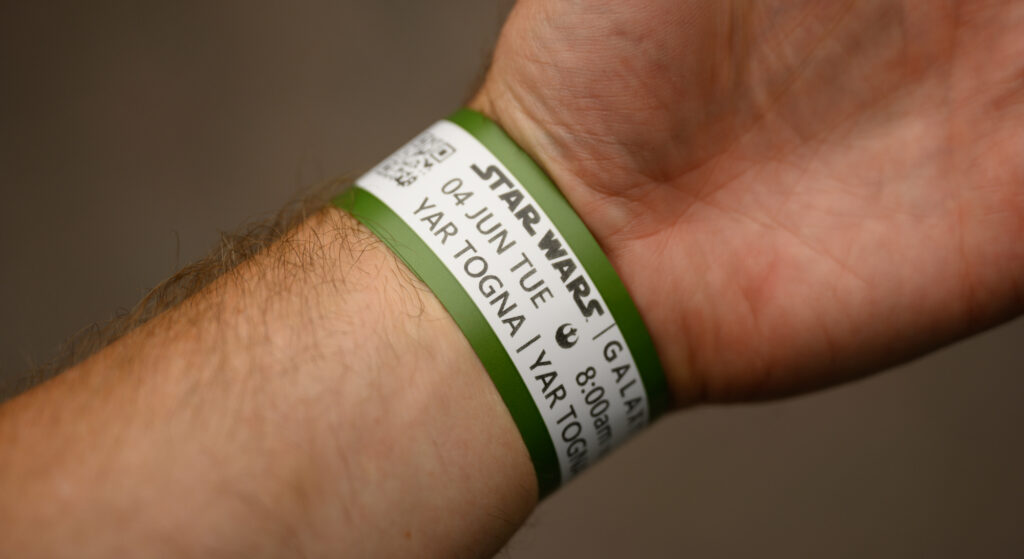 Before You Go (A Few Tips)

Reservations are required to enter Galaxy's Edge through June 23, 2019. I scored mine by booking a night at one of the Disneyland Resort hotels. With a confirmed reservation in hand, you actually have to first go to Star Wars Launch Bay in Tomorrow Land to pick up a color-coded bracelet, and then you can walk over Galaxy's Edge. It's a little cumbersome, but you can go two hours before your reservation and we didn't face any lines or waiting during this process. Disney was ready and well organized. (Reservations are no longer required.)

Starting June 24, 2019, anyone with a Disneyland ticket can enter Galaxy's Edge, which I suspect will lead to more crowds. Unfortunately, you won't be able to access Star Wars: Galaxy's Edge during Extra Magic Hour or Magic Morning. As of July (2019), you have to use the Disneyland Park app to get a Fast Pass to enter Galaxy's Edge, and you'll need to get Fast Passes for attractions as well as the Cantina, and they're distributed quite early in the day. 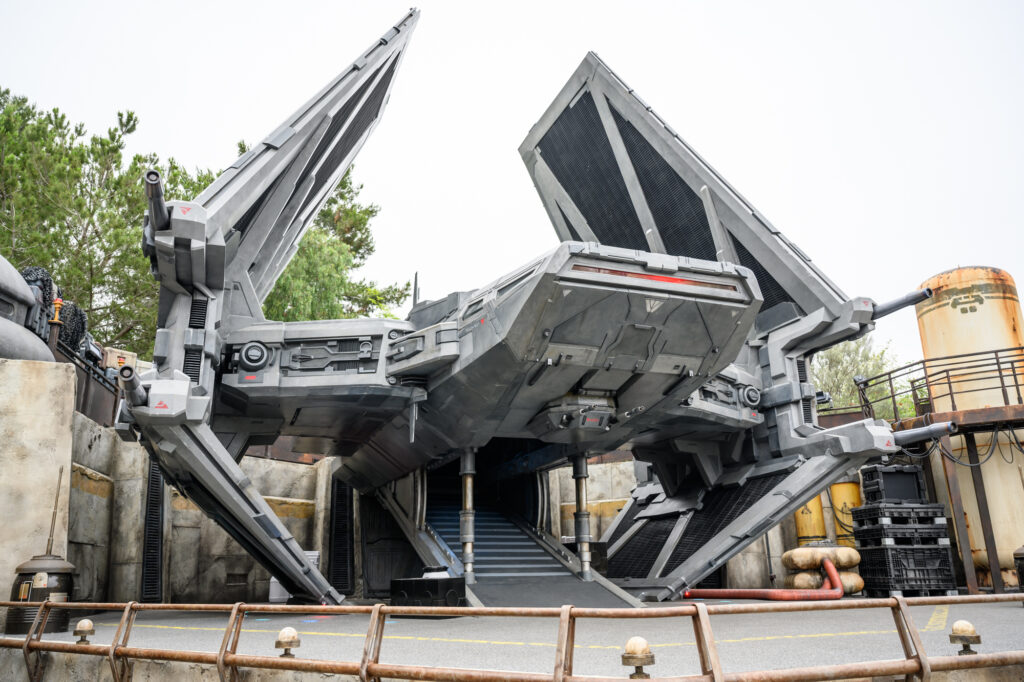 Like every new land created by the talented Disney Imagineers, Star Wars: Galaxy's Edge is a stunning testament to functional world-building. My favorite lands remain Cars Land in Disney's California Adventure and Pandora in Disney's Animal Kingdom, but Galaxy's Edge is right up there. It's an astonishing accomplishment that is as close as we can ever get to stepping into Star Wars.

Heck, they even pump in sounds of spaceships taking off or flying over the city. It's so impressive.

Still, I wouldn't come to Disneyland just to see this one land. Yes, it's filled with an infinite number of small details and even the stores feel like mini-attractions unto themselves. But with only one ride (or even with two), there isn't a full day's worth of activities once you get your fill of the incredible production design.

In that sense, if you don't live in Southern California, it might be best to wait until Galaxy's Edge has both rides running and remind yourself to enjoy the rest of the resort at the same time. Or perhaps the Florida incarnation will work better for you.

Regardless, Star Wars Galaxy's Edge comes highly recommended for Star Wars fans, Disney nerds, and theme park aficionados of all ages. See it for yourself. This is the one you've been waiting to see your whole life. 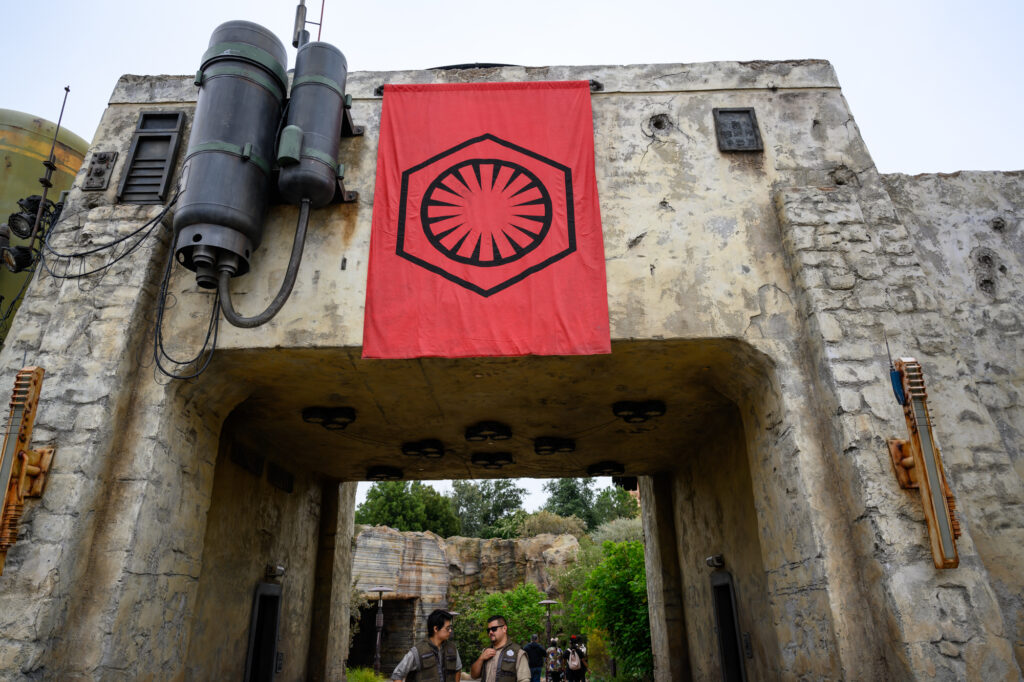