Sony has announced its latest projector model, the VPL-VZ1000ES. The compact ultra-short throw projector can be placed as close as 6 inches from a wall, making it ideal for customers who want a big image in a small room.

"The VPL-VZ1000ES Ultra-Short Throw projector is a real game changer. Everyone wants a larger screen, but not everyone can find the space for it. Sony enables the best of both worlds with this new generation of ultra-short throw projectors," said Mike Fasulo, President and COO of Sony Electronics. "Now, it’s possible to project a 4K HDR quality 100” or even 120” display in your family room without the need for a dedicated media room." 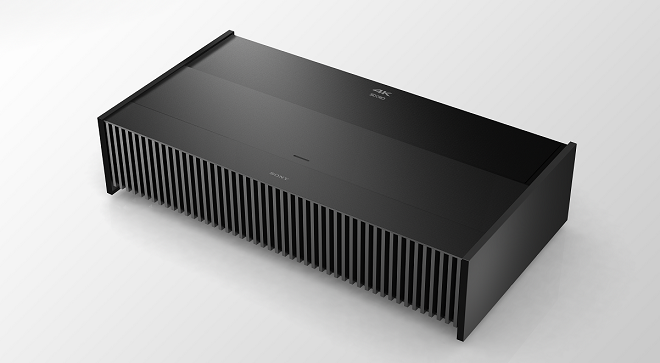 The VPL-VZ1000ES is an ultra short-throw laser light source projector with a native 4K resolution and HDR (high dynamic range) support. The device measure 36 x 20 x 9 inches in size (WxDxH, 925 x 494 x 219mm) and weighs about 77 lbs (35 kg), giving it a relatively compact form factor. Users can position the projector as close as 6 inches from a wall while still offering a 100 inch image (measured diagonally in 16:9). In addition, the device is rated for 2500 lumens of brightness and uses TRILUMNOS color tech. Likewise, the unit includes a built-in 3D transmitter for use with optional 3D glasses. Four HDMI HDCP 2.2 connections are integrated as well.

"Sony's new projector technology, combined with our anti-ambient screen materials that work especially with ultra-short throw projectors, allows consumers to have a huge screen in their living room with a simple, elegant installation," said Blake Vackar, Director of Commercial Sales at Screen Innovations, the leading manufacturer of projection screen technologies for residential applications. "This technology is unlike anything consumers have ever experienced in home cinema viewing. With the advent of 4K projector technology like Sony’s VPL-VZ1000ES we expect to see ultra-short throw projection, as a category of home projector sales, continue its rapid growth over the next 5 years."

The Sony VPL-VZ1000ES is now available for pre-order for a suggested retail price of $25,000. Shipments are expected to begin in April.