The family space adventure film will once again blast off on Blu-ray this September.

In an early announcement to retailers, Sony has revealed 'Zathura: A Space Adventure: 10th Anniversary Edition' will hit Blu-ray on September 22.

ZATHURA: 10th ANNIVERSARY EDITION stars Josh Hutcherson (The Hunger Games franchise), Kristen Stewart (Twilight franchise), Jonah Bobo (Crazy, Stupid, Love.), and Dax Sheppard (Parenthood) in the story of two young brothers who are drawn into an intergalactic adventure when their house is hurled through the depths of space by the magical board game they are playing. The all-new bonus features include an animated storybook version of the book narrated by author Chris Van Allsburg and the original theatrical trailer.

You can find the latest specs for 'Zathura: A Space Adventure: 10th Anniversary Edition' linked from our Blu-ray Release Schedule, where it is indexed under September 22. 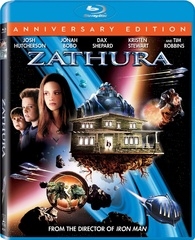