A non-limited release of the classic 1983 film will be parking on Blu-ray in September.

In an early announcement to retailers, Sony will be releasing John Carpenter's 'Christine' on Blu-ray on September 29.

Geeky student Arnie Cunningham falls for Christine, a rusty 1958 Plymouth Fury, and becomes obsessed with restoring the classic automobile to her former glory. But as the car changes, so does Arnie, and his newfound confidence turns to arrogance behind the wheel of his exotic beauty. Arnie's girlfriend Leigh and best friend Dennis reach out to him, only to be met by a Fury like no other.

Specs and supplements haven't been revealed yet, but the suggested list price for the Blu-ray is $19.99.

You can find the latest specs for 'Christine' linked from our Blu-ray Release Schedule, where it is indexed under September 29. 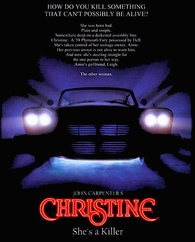