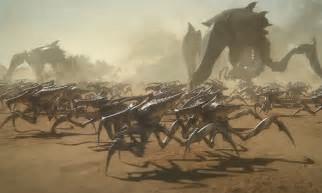 The brand new animated adventure and the original action-packed movie will receive the 4K UHD treatment in September.

In an early announcement to retailers, Sony says Starship Troopers: Traitor of Mars will be available on 4K Ultra HD Blu-ray and Blu-ray on September 19.

C’mon You Apes, You Wanna Live Forever?! I have only one rule. Everybody fights, no one quits. The bugs have breached Mars and the Federation’s Fleet is too far to help. It’s up to us to save the planet. On the bounce, Troopers! The only Good Bug is a Dead Bug! Oorah!

Casper Van Dien and Dina Meyer return as the voices of Johnny Rico and Dizzy Flores alongside comedian and Starship Troopers superfan DeRay Davis in an all-new military adventure from the writer of Starship Troopers and Robocop, Ed Neumeier.

The home entertainment release of STARSHIP TROOPERS: TRAITOR OF MARS includes the featurette “Expanding the Universe,” offering fans a comprehensive look at the making of the new Starship Troopers, interviews with star Casper Van Dien and screenwriter Ed Neumeier, and reflections from cast and crew on the legacy of the original film. Additional bonus materials include a deleted scene and photo gallery.