The action drama based on a true story is coming to Blu-ray.

In an early announcement to retailers, Sony is prepping Only the Brave for 4K Ultra HD Blu-ray and Blu-ray. An exact release date has not been revealed yet.

Only the Brave, based on the true story of the Granite Mountain Hotshots, is the heroic story of a team of local firefighters who - through hope, determination and sacrifice - become one of the most elite firefighting teams in the nation. Starring Josh Brolin, Miles Teller, Taylor Kitsch, Jeff Bridges, James Badge Dale and Jennifer Connelly, the firefighters forge a unique brotherhood that comes into focus as they fight a fateful fire to protect our lives, our homes and everything we hold dear.

You can find the latest specs for Only the Brave linked from our Blu-ray and 4K Release Schedules, where it is indexed under PENDING. 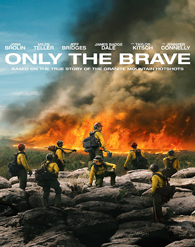