Sony Prepping 'The Indian in the Cupboard' for Blu-ray

In an early announcement to retailers, Sony is working on The Indian in the Cupboard: 20th Anniversary Edition' for on Blu-ray on September 22.

Celebrate the 20th anniversary of this enchanted classic, now for the first time on Blu-ray! On his ninth birthday, Omri is presented with many gifts - the most unusual being a cupboard. But this is no ordinary wooden box. It is endowed with magical power that transforms Omri's plastic toy figurines into living creatures. The first miniature to be animated is a 19th Century Iroquois warrior named Little Bear, who is terrified at first by his alien surroundings but soon bonds with hisgigantic playmate. But when Omri's friend, Patrick, gets in on the act and brings a six-shooting cowboy (David Keith, U-571) to life, their fantastic secret is in danger of being revealed. The Indian in the Cupboard is terrific family entertainment from director Frank Oz (Bowfinger) and Melissa Mathison, the writer of E.T., The Extra-Terrestrial.

Specs have yet to be revealed, but supplements will include: From the cast of Goosebumps (NEW), Little Bear: A Return to The Indian in the Cupboard, Featurette: Litefoot who famously played Little Bear looks back at this iconic role (NEW), Archival Making-of Featurette (NEW), Original Theatrical Trailer (NEW), and legacy features include commentary from Director Frank Oz.

You can find the latest specs for 'The Indian in the Cupboard: 20th Anniversary Edition' linked from our Blu-ray Release Schedule, where it is indexed under September 22. 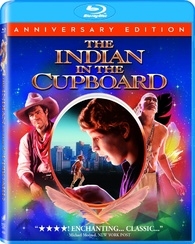