James D. Cooper's documentary is planned for Blu-ray next month.

In an early announcement to retailers, Sony says 'Lambert & Stamp' will arrive on Blu-ray on August 18.

From first-time documentarian James D. Cooper, the film follows the two young directors as they compare notes on film, music and frustrated ambitions, forging a friendship and collaboration along the way. Weaving between rare archival footage and present-day interviews with surviving principles, including The Who's Pete Townshend and Roger Daltrey, Lambert & Stamp examines the era and culture of the '60s and the creative bond of their unique friendship.

Specs have yet to be revealed, but supplements will include: Commentary with James D. Cooper, Q&A with Henry Rollins & Director James D. Cooper, and Never-Before-Seen Archival Footage of The Who exclusive to the Blu-ray.

You can find the latest specs for 'Lambert & Stamp' linked from our Blu-ray Release Schedule, where it is indexed under August 18. 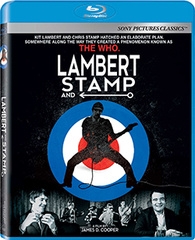