David Spade and his mullet will make their Blu-ray debut in July. You can pre-order the disc here.

In an early announcement to retailers, Sony is preparing 'Joe Dirt' for Blu-ray on July 7.

From the producing team that brought you 'Deuce Bigalow' and 'Big Daddy.' David Spade plays Joe, whose search for his family has him hittin' the road and keepin' it real with every lowlife he meets, including a sweet hottie (Brittany Daniel), a janitor (Christopher Walken), and a psychotic cannibal (Brian Thompson) with whom he has a brief interlude. Through it all, Joe keeps on trucking all the way to L.A., where a shock jock DJ (Dennis Miller) targets Joe as the butt of his show. But Joe's plucky spirit encourages listeners to cheer him on and help him find a better family than the one he thought he wanted. Rock on!

You can find the latest specs for 'Joe Dirt' linked from our Blu-ray Release Schedule, where it's indexed under July 7. 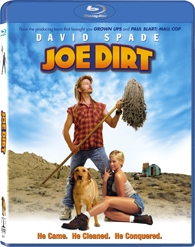 Discs mentioned in this article: (Click for specs and reviews)
Joe Dirt (Blu-ray)