The outrageous comedy will arrive on both home video formats this September.

In an early announcement to retailers, Sony says 'Rough Night' will be available on Blu-ray and 4K Ultra HD Blu-ray on September 5.

The Blu-rays will feature a lossless 5.1 soundtrack (Dolby Atmos on the 4K UHD) and supplements include: Scandalous Sing-Along – Follow the bouncing X-rated glasses with this original adult sing-along!; "Killer Cast" Featurette – Hear from your favorite cast of ladies as they discuss their first impressions and favorite parts of the film; "The Dynamic Duo: Lucia and Paul" Featurette – Lucia Anillo and Paul Downs discuss their past projects and how this one came to be; "Playing Dead" Featurette – Learn more about Jay-the-fake-stripper and hear from the cast and crew about working with and casting him; and "Do a Little Dance" Featurette – In this special feature, learn about the work behind the scenes that made this dance number "b'genius."

Blu-ray exclusives include: Gag Reel – Laughing along with the ladies of Rough Night in this hilarious collection of outtakes!; Deleted Scenes – 11 deleted scenes saved from the cutting room floor; "Naughty Neighbor" Diaries – Explore Pietro and Lea's one-of-a-kind sensual video dating profile; and Improv-O-Rama – Catch all the improv alternate lines of dialogue in this Improv-line-o-rama!

You can find the latest specs for Rough Night linked from our Blu-ray Release Schedule, where it is indexed under September 5. 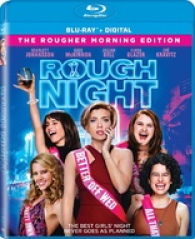 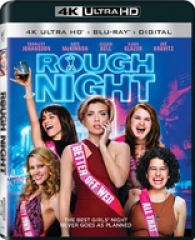