Both releases will be available in stores at the end of May.

In an early announcement to retailers, Sony says 'Pride and Prejudice and Zombies' on Blu-ray and 4K Blu-ray on May 31.

'Pride And Prejudice And Zombies' is a fresh twist on Jane Austen's widely celebrated novel. A mysterious plague has fallen upon 19th century England, the land is overrun with the undead and feisty heroine Elizabeth Bennet is a master of martial arts and weaponry. Casting aside personal and social prejudices, Elizabeth and Mr. Darcy must unite on the blood-soaked battlefield to rid the country of the zombie menace and discover their true love for one another.

The releases will include: Deleted Scenes; Mr. Collins Line-o-rama; Gag Reel; The Badass Bennet Sisters; Creating the Unmentionables; Courtship, Class and Carnage: Meet The Cast; and From Austen to Zombies: Adapting a Classic.

You can find the latest specs for 'Pride and Prejudice and Zombies' linked from our Blu-ray Release Schedule, where it is indexed under May 31. 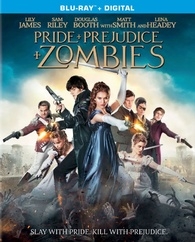