The acclaimed Spanish drama is headed for Blu-ray in March.

In an early announcement to retailers, Sony is working on 'Julieta' for Blu-ray on March 21.

In Julieta, critically acclaimed director Pedro Almodovar tells a story about a mother's struggle to survive uncertainty and come to grips with fate.

Julieta lives in Madrid with her daughter Antia. They are both in pain over the loss of Xoan, Antia's father and Julieta's husband. But sometimes grief doesn't bring people closer, it drives them apart. When Antia turns eighteen, she abandons her mother without a word of explanation. Julieta is haunted by the mystery of this loss and it pervades everything in her life. Her struggle and obsession lead to self discovery and surprising revelations.

Evoking such earlier Almodóvar films as High Heels and All About My Mother, Julieta reflects on the magic of chance encounters and the fragility of relationships in the face of long-buried secrets. Written and Directed by Pedro Almodóvar, Julieta is based on the short stories "Chance," "Soon" and "Silence" by Pulitzer Prize winning author Alice Munro. Agustín Almodóvar and Esther García produced the film.

The release will feature 1080p video, lossless 5.1 audio, and supplements include: "Portrait of Julieta" and "Celebrating Director Pedro Almodóvar".

You can find the latest specs for 'Julieta' linked from our Blu-ray Release Schedule, where it is indexed under March 21. 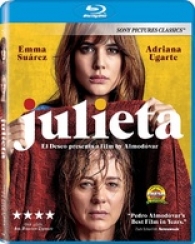