The thriller is set to arrive on the high-definition format in March.

In an early announcement to retailers, Sony says 'Elle' will be available on Blu-ray on March 14.

Michèle (Isabelle Huppert) seems indestructible. Head of a successful video game company, she brings the same ruthless attitude to her love life as to business. Being attacked in her home by an unknown assailant changes Michèle's life forever. When she resolutely tracks the man down, they are both drawn into a curious and thrilling game - a game that may, at any moment, spiral out of control.

Specs have yet to be revealed, but supplements include: "A Tale of Empowerment: Making Elle" and "Celebrating an Icon: AFI's Tribute to Isabelle Huppert" .

You can find the latest specs for 'Elle' linked from our Blu-ray Release Schedule, where it is indexed under March 14. 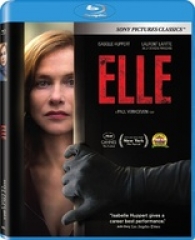