The sci-fi flick starring Sharlto Copley, Dev Patel, and Hugh Jackman is coming to Blu-ray in June. You can pre-order the movie here.

In an early announcement to retailers, Sony is preparing 'Chappie' for Blu-ray on June 16.

In the near future, crime is monitored by an oppressive mechanized police force. But now, the people are fighting back. When one police droid, Chappie, is stolen and given new programming, he becomes the first robot with the ability to think and feel for himself.  As powerful and destructive forces start to see Chappie as a danger to mankind and order, they will stop at nothing to maintain the status quo and ensure that Chappie is the last of his kind.

Specs have not been detailed yet, but supplements will include: an Alternate Ending and over an hour of extras.

Suggested list price for the Blu-ray/Digital HD combo pack is $34.99.

You can find the latest specs for 'Chappie' linked from our Blu-ray Release Schedule, where it's indexed under June 16. 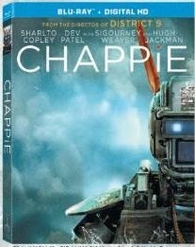 Discs mentioned in this article: (Click for specs and reviews)
Chappie (Blu-ray)