In an early announcement to retailers, Sony will be releasing 'Infinitely Polar Bear' on Blu-ray on January 5.

While most fathers spend their days at work, Cam (Mark Ruffalo) is more likely to be found working on one of his many half-completed projects. As he recovers from a manic breakdown, his wife Maggie (Zoe Saldana) enrolls in an out-of-state graduate school program in the hopes of building a better life for her family. Cam agrees to become the primary caregiver for his spirited young daughters and quickly finds himself in over his head. Based on a true story, Infinitely Polar Bear is a touching and entertaining portrait of the many unexpected ways in which parents and children save each other.

You can find the latest specs for 'Infinitely Polar Bear' linked from our Blu-ray Release Schedule, where it is indexed under January 5. 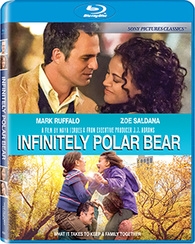