The new Blu-ray edition of the family adventure film arrives in September.

In an early announcement to retailers, Sony says 'Jumanji: 20th Anniversary Edition' is headed for Blu-ray on September 22.

JUMANJI: 20th ANNIVERSARY EDITION stars Academy Award winner Robin Williams (Best Supporting Actor, Good Will Hunting, 1997), Kirsten Dunst (Spider-Man trilogy) and Bradley Pierce (The Borrowers). When two kids find and play a magical board game, they release a man trapped for decades in it and a host of dangers that can only be stopped by finishing the game. The all-new bonus features include animated storybook excerpts from the book, narrated by author Chris Van Allsburg, two episodes of the 1996 Jumanji: The Animated Series TV show and the original theatrical trailer.

You can find the latest specs for 'Jumanji: 20th Anniversary Edition' linked from our Blu-ray Release Schedule, where it is indexed under September 22. 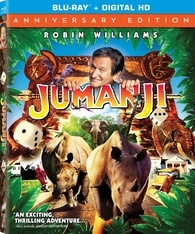