The comedy starring Kevin Hart and Josh Gad will get hitched to Blu-ray in April.

In an early announcement to retailers, Sony will be releasing 'The Wedding Ringer' on Blu-ray on April 28.

Doug is a socially awkward groom-to-be with a problem: he has no best man. With less than two weeks to go until he marries the girl of his dreams, Doug is referred to Jimmy, who provides flattering best men for guys in need. What ensues is a hilarious wedding charade as they try to pull off the big con, and an unexpected budding friendship.

The Blu-ray will feature 1080p video, a lossless 5.1 soundtrack, and supplements include: Going to the Chapel of Love and Select Scenes Commentary with Director Jeremy Garelick and Josh Gad.

Blu-ray exclusives include: 15 Deleted Scenes; Five Outtake Reels; Line-o-Rama (short collections of alternate shots of jokes on set); and go to Aloe Blaccs Can You Do This Music Video.

You can find the latest specs for 'The Wedding Ringer' linked from our Blu-ray Release Schedule, where it is indexed under April 28. 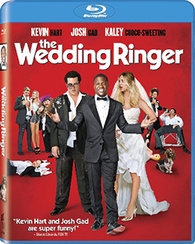