The action-adventure arrives in a Blu-ray/Blu-ray 3D combo pack in December.

In an early announcement to retailers, Sony will be releasing 'Wolf Totem - 3D' on Blu-ray on December 15.

In director Jean-Jacques Annaud's film adaptation of Jiang Rong's best-selling novel, a young Beijing student is sent to live among the nomadic herdsmen of Inner Mongolia. Caught between the advance of civilization from the south and the nomads' traditional enemies – the marauding wolves – to the north, humans and animals, residents and invaders alike, struggle to find their true place in the world.

Specs haven't been revealed yet, but supplements include: 4 Making of Featurettes.

You can find the latest specs for 'Wolf Totem' linked from our Blu-ray Release Schedule, where it is indexed under December 15. 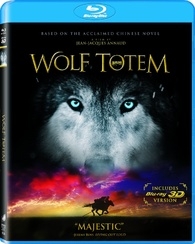