The 2014 film will skate to Blu-ray this summer.

In an early announcement to retailers, Sony has revealed 'Red Army' will be available on Blu-ray on June 8.

Red Army is an inspiring true story about the Cold War played out on the ice rink, and a man who stood up to a powerful system, paving the way for generations of Russians. From Oscar-nominated and Emmy award-winning filmmakers, Red Army examines the most successful dynasty in sports history: the Red Army hockey team. Told from the perspective of its captain, Slava Fetisov, the story portrays his transformation from national hero to political enemy. With the demise of Communism came the end of the Cold War, as Soviet players began joining the National Hockey League. The film examines how sport mirrors social and cultural movements in Cold War Russia.

You can find the latest specs for 'Red Army' linked from our Blu-ray Release Schedule, where it is indexed under June 8. 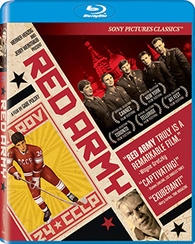