The comedy sequel is planned for Blu-ray in January.

In an early announcement to retailers, Sony is preparing 'Joe Dirt 2: Beautiful Loser' for Blu-ray on January 5.

The hicksterical sequel to Joe Dirt has David Spade returning as the mullet-headed hero. After he’s transported back in time, Dirt must fight to get back to the present and to his family. Brittany Daniel (The Game), Patrick Warburton (Rules of Engagement) and Christopher Walken (Wedding Crashers) also star.

Specs and supplements haven't been revealed yet, but suggested list price for the Blu-ray is $26.99.

You can find the latest specs for 'Joe Dirt 2: Beautiful Loser' linked from our Blu-ray Release Schedule, where it is indexed under January 5. 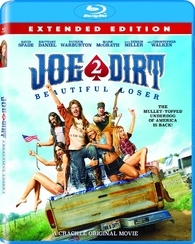