In an early announcement to retailers, Sony will be releasing 'Aloha' on Blu-ray on August 25.

A celebrated military contractor (Bradley Cooper) returns to the site of his greatest career triumphs -- Honolulu, Hawaii -- and reconnects with a long-ago love (Rachel McAdams) while unexpectedly falling for the hard-charging Air Force watchdog (Emma Stone) assigned to him.

Specs have yet to be revealed, but supplements will include: The Untitled Hawaii Project: The Making of Aloha Feature Length Documentary - Narrated by Cameron Crowe, this engrossing and authentic documentary will make viewers feel like they are on set and serve as a behind-the-scenes window into the journey of how the film was made; and Cast Gag Reel.

You can find the latest specs for 'Aloha' linked from our Blu-ray Release Schedule, where it is indexed under August 25. 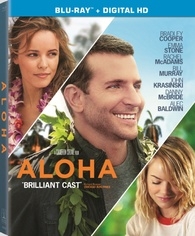