'A League of Their Own: 25th Anniversary Edition' Announced and Detailed for Blu-ray

Penny Marshall's 1992 baseball comedy is getting a 25th anniversary edition in April.

In an early announcement to retailers, Sony will be bringing the PG film 'A League of Their Own' to Blu-ray on April 18.

Celebrate the 25th anniversary of this hilarious and beloved comedy starring Tom Hanks, Geena Davis and Madonna. Hanks stars as Jimmy Dugan, a washed-up ballplayer whose big league days are over. Hired to coach in the All-American Girls Baseball League of 1943 – while the male pros are at war – Dugan finds himself drawn back into the game by the hearts and heroics of his all-girl team, led by the indomitable Dottie Hinson (Davis). Lori Petty, Rosie O'Donnell and Jon Lovitz round out the all-star roster. Based on the true story of the pioneering women who blazed the trail for generations of athletes.

The Blu-ray will feature 1080p video, a DTS-HD Master Audio 5.1 soundtrack, and supplements include Commentary with Penny Marshall, Lori Petty, Megan Cavanagh, and Tracy Reiner; deleted scenes with video introductions by Penny Marshall; Nine Memorable Innings Pre-Game; and "This Used to Be My Playground" music video; along with an ALL-NEW featurette: "Bentonville, Baseball & The Enduring Legacy of A League of Their Own".

You can find the latest specs for 'A League of Their Own: 25th Anniversary Edition' linked from our Blu-ray Release Schedule, where it's indexed under April 18. 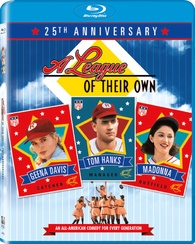