The nature documentary is swimming toward Blu-ray and Ultra HD Blu-ray in August.

In an early announcement to retailers, Shout Factory is preparing 'Humpback Whales' for Blu-ray on August 2. An Ultra HD Blu-ray/Blu-ray 3D version will also be released on that same day.

Narrated by two-time Golden Globe® nominee Ewan McGregor, HUMPBACK WHALES is an extraordinary journey into the mysterious world of one of nature’s most awe-inspiring marine mammals. Set in the spectacular waters of Alaska, Hawaii and the remote islands of Tonga, this ocean adventure offers audiences an up-close look at how these whales communicate, sing, feed, play and take care of their young.  Captured for the first time with IMAX® 3D cameras, and found in every ocean on earth, humpbacks were nearly driven to extinction 50 years ago, but today are making a slow but remarkable recovery. Join a team of researchers as they unlock the secrets of the humpback and find out why humpbacks are the most acrobatic of all whales, why they sing their haunting songs, and why these intelligent 55-foot, 50-ton animals migrate up to 10,000 miles round-trip every year. 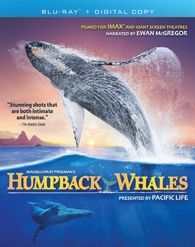 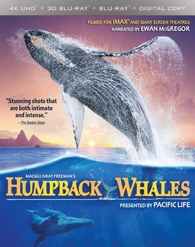