At first it wasn't shipping until March. Then rumors implied mid-February. Then Video and Audio Center blew the lid off things last week, followed by Frys and BestBuy.com. These players are flying off the shelves into the hands of excited early adopters, and we managed to snag one.

It's official. The era of Ultra HD Blu-ray is upon us...

Well, sort of. We don't have any discs just yet, but we're going to. Very soon. Over twenty titles from major studios like Sony, Warner Bros, Lionsgate, and 20th Century Fox. All of them officially dropping March 1, 2016 and we're, for lack of a better term, super excited.

Pardon the gush. Of course not all of these UHD Blu-rays are going to be a home run, and having held 'The Martian' and 'The Kingsman' UHD BD packages in hand, I can confirm not all of these new titles are getting Dolby Atmos and DTS:X upgrades versus their Blu-ray counterpart (a damned shame, in my opinion). And there's still some questions about resolution (some films were supposedly shot and/or mastered in 2K for their theatrical runs).

And like many others, I wish there was room for 3D in the Ultra HD Blu-ray specification. Not because Hollywood even produces 4K 3D content(I'm pretty sure they don't), but because of the wider color gamut. I caught a special screening of 'The Martian 3D' last night in Dolby Vision HDR 3D (it was 2K) and it was extraordinary. Hopefully this can be addressed in the future.

But the key features for me are BANDWIDTH  -- a whopping 100Mbps compared to streaming, which is in the 10-20Mbps range depending on your ISP -- and HDR (High Dynamic Range). Dolby Vision HDR is a revelation in cinemas, and here in Ultra HD Blu-ray, Dolby Vision and "HDR-10" promise to not just give us MORE pixels, but BETTER pixels. Deeper black levels. Brighter brights. Insane contrast ratios. And cinema-level (and beyond) color gamut capabilities.

Movies and TV Shows have never looked this good. Ever. Not even at your local theatre.

Then there's reliability. Assuming you don't lose power, UHD Blu-rays will play all day long with nary a moment of buffering. 100Mbps instantaneously. After coincidentally spending half of my day on the phone with Apple and Time Warner Cable trying to put an end to random dropouts of what's normal blazingly fast broadband, I have to say physical media is looking extra sweet as I write this.

Say what? HDD's starting up a YouTube channel and here's our first video, a quick hands-on unboxing of the UBD-K8500? Yes, please.

The K8500 is a mid-sized disc player -- not quite as chunky as those first gen Blu-ray players, but not nearly as svelte as modern players. I'd compare it to second or third gen Blu-ray players. It features a curved design, mirroring the look of Samsung's 2015 and 2016 flagship displays. Some take a little umbrage to this aesthetic, but it's pretty subtle in person and almost-invisible when its tucked in amongst your other gear.

Upfront, you've got the disc-loading tray, a USB input, and a few buttons -- power, eject, etc. Round the backside, owners are treated to a detachable power cord input, an optical digital audio output, a LAN port for hard-wiring the player to your home network (WiFi is also built-in), and dual HDMI outputs. The main HDMI port is for use with 4K-capable gear (HDCP 2.2) -- connect either to an AV Receiver or a pre-pro or to a display. The other HDMI port is marked AUDIO and is for sending uncompressed and lossless audio codecs to older non-4K-compliant audio gear. So, good news, if you get this UHD BD Player and don't really care about Dolby Atmos or DTS:X, you don't have to run out to get a new AVR at the same time. Score.

Samsung calls the K8500 a "universal disc player". In other words, in addition to playing Ultra HD Blu-rays, it is 100% backwards compatible with your Blu-rays, your 3D Blu-rays, your DVDs (including DVD-R and DVD-RW), and even your CDs. Oh, at while your AVR and 4K Ultra HD display will also offer these features, the K8500 can upscale all content to 4K.

(Pro Tip: I just noticed the player defaults to PCM digital audio out via HDMI, so if you have Dolby Atmos or DTS:X, make sure to set it to bitstream.)

HDR and Samsung's Smart Hub are the two other major features for this model. As mentioned above, High Dynamic Range is the future of color grading, offering more contrast and color capabilities than ever before. And the studios are really jumping on the HDR bandwagon because, outside of resolution, it's the biggest and most obvious difference between UHD and HD content. In the K8500's case, it can reproduce HDR-10, meeting the UHD BD specification, but sadly does not offer Dolby Vision, which is currently available in professional Dolby Cinema locations as well as via streaming apps like VUDU.

Speaking of streaming, the K8500 is also -- like many Blu-ray Players -- a media hub. Akin to the Roku 4, it offers resolutions up to 4K on services like Netflix, HULU, Amazon,  YouTube, YUPP TV, M-GO, and VUDU. These apps live in the Samsung Smart Hub menu system, which seeks to seamlessly integrate traditional video streaming apps with Facebook, Pandora, and many other apps. There's also screen mirroring and, presumably, access to content stored remotely on networked computers and hard drives.

All of these features, and probably more, for $399.99. Yes, that's a few more clams than most are paying for current generation Blu-ray players or media streamers, but I'm pretty stunned this is a first gen price-point. Remember the thousand-plus dollar price tags for DVD and Blu-ray players...and they hardly worked at all. Those days are gone.

Caveat one. I've now spent more time WRITING about the K8500 than TESTING it; most of this is due to the fact that 1) we don't have any UHD Discs just yet, and 2) I'm hoping to score a different, flagship display for review purposes. Either way, we're going to be ready to review this player along with these discs the moment the studios send them our way (or at least as soon as they hit stores).

Caveat two. I did get to see fifteen or so minutes of 'The Martian' UHD Blu-ray in a store last Friday, and the results were impressive to need-more-research. In comparing the UHD Blu-ray to the standard Blu-ray (on difference tiered displays, sadly) UHD Blu-ray offered a noticeable uptick in visible on-screen detail, even at ten feet away from the 65" displays, and the Blu-ray seemed much more grainy and dark. I mention this to say I'm excited about the format; I believe there will be obvious improvements over Blu-ray. However, I can't be more specific because the calibration on this in-store display was wonky -- over-saturated colors (a suspicion that was confirmed last night when I saw 'The Martian' in Dolby Vision, so I have a benchmark) and an image made waxy by unnecessary motion processing.

Image quality aside (more testing on the way, for both streaming and all sorts of physical media), I'm already pretty impressed with this player. Startup time is less than 10 seconds. Setup process took less than five minutes (including a firmware upgrade, not including typing your password into streaming services). I have thus far successfully streamed content and played back Blu-ray, Blu-ray 3D, and DVD -- I was particularly impressed by how quickly it loaded a Disney Blu-ray 3D that nearly sends my older Panny into fits. The streaming apps are pretty speedy too; maybe not quite Roku or Apple fast, but close. I'm not sure I love Smart Hub, but I honestly need to give it more time to see what it can do. And, should you need, for any reason, the K8500 can be hooked up to 1080p and 720p displays thanks to an AUTO resolution setting in menu. Basically, if you have HDMI, the K8500 will connect to it (how it reacts to playing HDCP 2.2 content on such a display has yet to be tested). 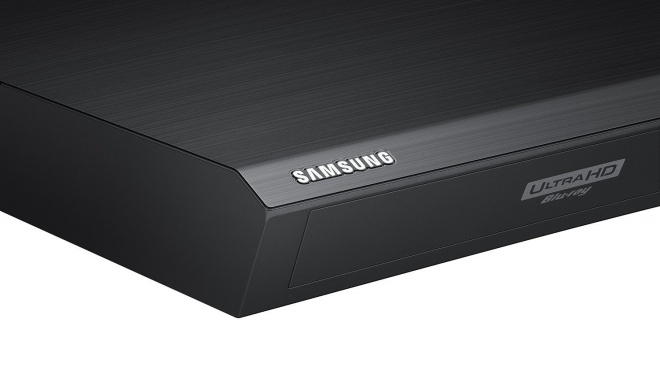 All in all? This could have been an epic disaster -- slow loading times, a horrible interface, clunky remote, EXPENSIVE -- but it's not. It's pretty much a machine any home theatre enthusiast can use and, assuming these performance levels hold, shouldn't be a hair-pulling experience.

We have a LOT more work to do with it, of course, but so far I have high hopes for this little machine. Stay tuned for more.