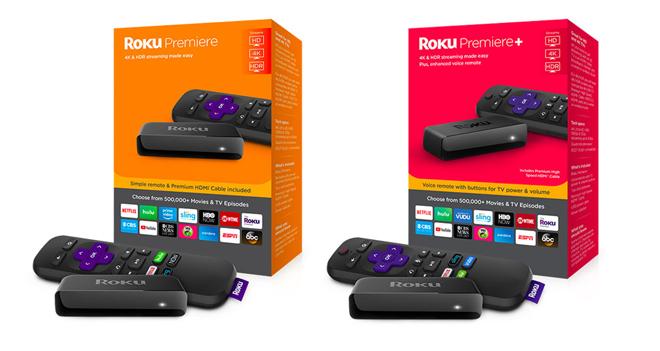 New Roku models have been revealed.

Roku has announced the latest additions to its 4K HDR streaming media player lineup. The collection includes the new Roku Premiere ($40) and Roku Premiere+ ($50), which will replace the more expensive current gen versions. Likewise, an updated version of the Roku Ultra ($100) has also been detailed.

"Roku Premiere and Roku Premiere+ are the easiest and most affordable way to stream in outstanding picture quality. Tens of millions of 4K TVs will be sold this year; we’re seeing more content, even live sports, produced and streamed in 4K and HDR as each week goes by," said Lloyd Klarke, director of product management, Roku. "At under $40, the new Roku Premiere is our lowest-priced 4K streaming player ever, and it’s going to give consumers the best picture quality their TV can handle. It is great for HDTV today and even better if they decide to get a 4K TV tomorrow."

Both models feature low profile designs and offer support for 4K HDR10 streaming playback along with access to Roku's robust selection of apps and services, including the Roku Channel and 4K Spotlight Channel. In addition, the Premiere+ model adds a voice remote. Here's a full rundown of key features per Roku:

And beyond the new Premiere models, Roku has also announced an updated version of its flagship Roku Ultra. The new package includes premium JBL headphones (valued at $39.95), and two new remote finder sounds: SportsCenter's Da-Da-Da from ESPN and HBO's Game of Thrones theme song. Here's a full rundown of key features per Roku: