The Ultra HD Blu-ray player will come packaged with a copy of Warner Brothers' 'Creed.'

P&F USA has announced plans to bundle the Ultra HD Blu-ray release of 'Creed' with its upcoming Philips branded BDP7501 Ultra HD Blu-ray player. The bundle will be available later this month for a suggested retail price of $400.

The BDP7501 Ultra HD Blu-ray player features a compact design along with HDR support, HDMI 2.0a and 1.4a outputs, a dedicated HDMI audio out, and HDCP 2.2 compliancy. In addition to Ultra HD Blu-ray disc playback, the device offers Blu-ray 3D support and 4K upscaling. HEVC and VP9 decoding are integrated as well, allowing customers to watch 4K videos from streaming apps like Netflix and YouTube. Likewise, the players include Dolby TrueHD and DTS-HD Master Audio decoding, and passthrough for Dolby Atmos and DTS:X immersive audio formats. Wi-Fi, Ethernet, and USB connectivity are also included.

Copies of 'Creed' on Ultra HD Blu-ray will be bundled with the player through September 30. The Ultra HD Blu-ray/Blu-ray/Digital HD combo pack features 2160p video with HDR and a DTS-HD MA soundtrack.

Adonis Johnson (Michael B. Jordan), son of deceased world heavyweight champion Apollo Creed, has boxing in his blood. Looking to win his own title, Adonis heads to Philadelphia and convinces his father's rival-turned-friend, Rocky Balboa (Sylvester Stallone), to train him – even as Rocky battles his own deadly opponent outside the ring. Now Adonis has a shot, but first he must develop the heart of a true fighter in this new chapter of the Rocky story from critically acclaimed director Ryan Coogler. 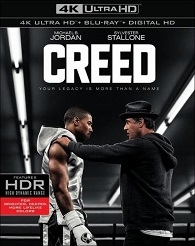