The latest entry in the Terminator franchise could be headed to 4K Ultra HD Blu-ray.

Rumors indicate that Paramount is prepping Terminator: Genisys for a potential 4K Ultra HD Blu-ray release in the US. The 4K disc is already available in several foreign markets, including France, Spain, Japan, and the UK.

When John Connor (Jason Clarke), leader of the human resistance, sends Sgt. Kyle Reese (Jai Courtney) back to 1984 to protect Sarah Connor (Emilia Clarke) and safeguard the future, an unexpected turn of events creates a fractured timeline. Now, Sgt. Reese finds himself in a new and unfamiliar version of the past, where he is faced with unlikely allies, including the Guardian (Arnold Schwarzenegger), dangerous new enemies, and an unexpected new mission: To reset the future...

Specs have not been revealed, but the import Ultra HD Blu-rays feature 2160p video with HDR10 and a Dolby Atmos soundtrack. And though those releases only include the previously available Blu-ray special features, Terminator fan site, Skynet's Army, continues to hear rumblings about a possible Special Edition disc with new supplements, including deleted scenes.

With that said, Paramount has not confirmed any new releases of the flick, 4K or otherwise, for the US market at this time. For now, be sure to check out our review of the Terminator: Genisys - 4K Ultra HD Blu-ray (French Import). Likewise, you can order the region free import discs below. 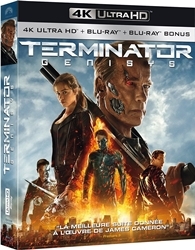 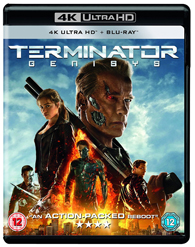