Jerry Seinfeld's 'Comedians in Cars Getting Coffee' Heads to Netflix

The streaming series is moving from Crackle to Netflix.

Netflix has announced a new multi-faceted production deal with Jerry Seinfeld. As part of the agreement, new episodes of Seinfeld's 'Comedians in Cars Getting Coffee' will start streaming exclusively through Netflix in late 2017, along with the show's collection of previous episodes. In addition, the comedian will film two, all-new stand-up shows exclusively for Netflix, and will also help develop scripted and non-scripted comedy programming for the streaming platform.

"Jerry is known the world over as both a great TV innovator and beloved comic voice," said Ted Sarandos, Chief Content Officer at Netflix. "We are incredibly proud to welcome him to the Netflix comedy family." 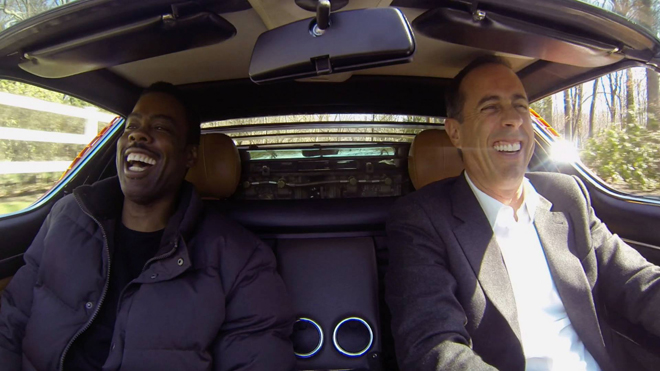 'Comedians in Cars Getting Coffee' features Seinfeld as he joins various friends for a cup of coffee and a drive in a classic car, sharing stories along the way. The show originated on the Crackle streaming service but will make the jump to Netflix later this year. 24 new episodes are set to premiere in installments starting in late 2017, followed by subsequent episodes in 2018 and beyond. In addition, the series' previous 59 episodes will also move exclusively to Netflix.

"When I first started thinking about Comedians in Cars Getting Coffee, the entire Netflix business model consisted of mailing out DVDs in envelopes. I love that we are now joining together, both at very different points," said Seinfeld, who produces, directs and hosts the show. "I am also very excited to be working with Ted Sarandos at Netflix, a guy and a place that not only have the same enthusiasm for the art of stand up comedy as I do, but the most amazing technology platform to deliver it in a way that has never existed before. I am really quite charged up to be moving there."

Other upcoming Netflix premieres include 'Frontier' on January 20, 'Santa Clarita Diet' on February 3. 'David Brent: Life on the Road' on February 10, a new Amy Schumer comedy special on March 7, and 'Iron Fist' on March 17.

Other upcoming Netflix premieres include 'Frontier' on January 20, 'Santa Clarita Diet' on February 3. 'David Brent: Life on the Road' on February 10, a new Amy Schumer comedy special on March 7, and 'Iron Fist' on March 17.