The story of bass guitarist Jaco Pastorius will be shared on Blu-ray in November.

In an early announcement to retailers, MVD Visual is preparing 'Jaco' for Blu-ray on November 27.

JACO a compelling story of prodigious talent, personal adventures and raw human vulnerability, 'JACO' presents the world of the bass guitar phenomenon Jaco Pastorius through the eyes of his family and various musical collaborators. Produced by the Metallica bassist Robert Trujillo, and directed by Paul Marchand and Stephen Kijak, this blistering biopic contains incredible unseen footage and photography from the Pastorius family archive, and takes viewers into the heart and soul of this hugely influential cross-genre artist. Featuring interviews with an array of artists (Flea, Joni Mitchell, Sting, Wayne Shorter, Herbie Hancock, Geddy Lee) and friends, 'JACO' unveils the story of his music, his life, his demise, and ultimately the fragility of great artistic genius.

Specs have not been detailed yet, but supplements will include: Outtakes, Anecdotes, and Stories - with 30 never-before-seen interviews with Flea, Joni Mitchell, Carlos Santana, Mike Stern and many more, who discuss Jaco's incredible contributions to music, the art of the bass and the boundaries of music, as well as Jaco the person. Hear stories about Jaco's earliest bands and classic recordings. Includes special footage used during the historic Hollywood Bowl (Jaco s World) Tribute Show 2015, plus many surprises.

You can find the latest specs for 'Jaco' linked from our Blu-ray Release Schedule, where it's indexed under November 27. 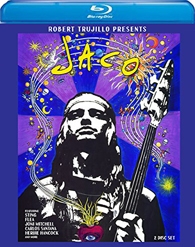 Discs mentioned in this article: (Click for specs and reviews)
Jaco (Blu-ray)