'Devo: Hardcore Live!' Is Rocking out on Blu-ray in February

The rock band offers a tribute to Bob "Bob 2" Casale in this disc, and pre-ordes are now live.

In an early announcement to retailers, MVD Visual is preparing 'Devo: Hardcore Live!' for Blu-ray on February 10.

Devo captured live in Oakland, performing early experimental tracks. No matter how messy, beginnings are exciting. Especially when what happens next endures the test of time. For Devo the beginning happened in the basements and garages of Akron, Ohio. The songs they wrote were raw and unfiltered with no commercial intent. They called it Hardcore Devo. Performing 21 oddities, intercut with poignant stories told by Mark, Jerry and Bob 1, this program is a tribute to the departed Bob "Bob 2" Casale.

You can find the latest specs for 'Devo: Hardcore Live!' linked from our Blu-ray Release Schedule, where it's indexed under February 10. 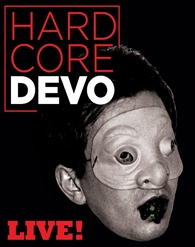