Four flicks from the director are heading to Blu-ray in July.

In an early announcement to retailers, Mill Creek Entertainment is preparing 'Homicidal / Mr. Sardonicus' and '13 Ghosts / 13 Frightened Girls!' for Blu-ray on July 5.

'Homicidal' - In the small town of Solvang, there's a killer on the loose and the nurse taking care of a wheelchair bound stroke victim has a bedside manner is to die for. As the truth is uncovered, a town's most chilling mystery will be revealed... and a family's darkest secret. Starring Glenn Corbett, Patricia Breslin, Eugenie Leontovich, Alan Bunce, Richard Rust, and James Westerfield.'Mr. Sardonicus' -  Desperate to retrieve a winning lottery ticket, a greedy man unearths his father's corpse. An enormous jackpot is his reward, but not without a price: his face is frozen permanently into a hideous grin. He enlists his one-eyed servant to help him lift the curse. Starring Ronald Lewis, Audrey Dalton, Guy Rolfe, Oskar Homolka, Vladimir Sokoloff, and Erika Peters.

'13 Ghosts' - When an eccentric uncle wills a huge, ramshackle house to his impoverished family, they get the shock of a lifetime. Their new residence comes complete with a spooky housekeeper, plus a fortune in buried treasure and 12 horrifying ghosts. Starring Charles Herbert, Jo Morrow, Martin Milner, Rosemary DeCamp. Donald Woods, and Margaret Hamilton.'13 Frightened Girls' - Murray Hamilton, Joyce Taylor, Hugh Marlowe, Khigh Dhiegh, Charlie Briggs, Norma Varden The girls of a Swiss boarding school have one thing in common — they are all daughters of diplomats. One in particular finds out that she has a knack for espionage, and uncovers the murder of a Russian diplomat. Now she must escape using her girlish wiles. Starring Murray Hamilton, Joyce Taylor, Hugh Marlowe, Khigh Dhiegh, Charlie Briggs, and Norma Varden.

Suggested list price for each Double Feature Blu-ray is $14.98.

You can find the latest specs for 'Homicidal / Mr. Sardonicus' and '13 Ghosts / 13 Frightened Girls!' linked from our Blu-ray Release Schedule, where they are indexed under July 5. 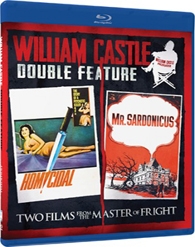 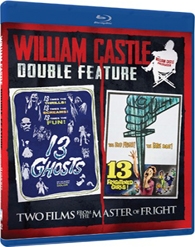