'My Boyfriend's Back' Blu-ray Dated for March

Old flames will rise from the dead on Blu-ray in March.

In an early announcement to retailers, Mill Creek Entertainment is preparing 'My Boyfriend's Back' for Blu-ray on March 15.

Teenager Johnny Dingle will do anything to keep his date with the hottest girl in school -- even come back from the grave! You see, Johnny had the perfect scheme to win the heart of Missy McCloud, the town beauty. Unfortunately, Johnny's scam goes sour and he winds up dead! Even so, Johnny's determined to keep his date -- unaware of the hilarity waiting for him upon his return! See for yourself why everyone's dying to see this outlandishly funny comedy!

You can find the latest specs for 'My Boyfriend's Back' linked from our Blu-ray Release Schedule, where it's indexed under March 15. 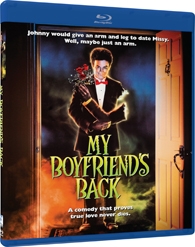 Discs mentioned in this article: (Click for specs and reviews)
My Boyfriend's Back (Blu-ray)