The series featuring David Hasselhoff will be speeding to Blu-ray in October.

In an early announcement to retailers, Mill Creek will be bringing 'Knight Rider: The Complete Series' to Blu-ray on October 4.

Ride shotgun with mysterious crime fighter Michael Knight (David Hasselhoff) and the hottest car on four wheels, K.I.T.T., as they chase elusive criminals in each action-packed episode. The heart-pounding complete series of Knight Rider packs in even more thrills, more high-speed chases, and more full-throttle excitement with dynamic duo Michael Knight and K.I.T.T. in the action series that left all others in the dust. SIXTEEN-DISC BLU-RAY BOX SET.

Specs and supplements haven't been revealed yet, but the suggested list price for the Blu-ray is $99.98.

You can find the latest specs for 'Knight Rider: The Complete Series' linked from our Blu-ray Release Schedule, where it is indexed under October 4. 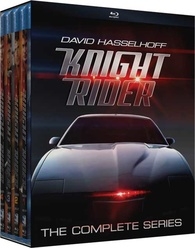