Back in Style: 'Miami Vice: The Complete Series' Dated for Blu-ray

The classic 1980s series will be getting the Blu-ray treatment in October.

In an early announcement to retailers, Mill Creek will be releasing 'Miami Vice: The Complete Series' on Blu-ray on October 4.

Specs and supplements haven't been revealed yet, but the suggested list price for the Blu-ray is $99.98.

You can find the latest specs for 'Miami Vice: The Complete Series' linked from our Blu-ray Release Schedule, where it is indexed under October 4. 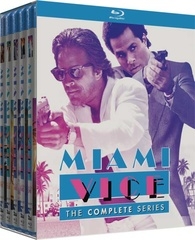