Both IMAX documentaries will be hitting the 4K format in December.

In an early announcement to retailers, Mill Creek Entertainment is preparing A Beautiful Planet for 4K Ultra HD Blu-ray on December 11.

Narrated by Academy Award® winner Jennifer Lawrence, A Beautiful Planet is a breathtaking portrait of Earth from space, providing a unique perspective and increased understanding of our planet and galaxy as never seen before. Made in cooperation with the National Aeronautics and Space Administration (NASA), the film features stunning footage of our magnificent blue planet and the effects humanity has had on it over time captured by the astronauts aboard the International Space Station (ISS). From space, Earth blazes at night with the electric intensity of human expansion a direct visualization of our changing world. But it is within our power to protect the planet. As we continue to explore and gain knowledge of our galaxy, we also develop a deeper connection to the place we all call home.

The release will feature 2160p video, a DTS:X soundtrack, and supplements include An Extraordinary Vision, IMAX: Astronaut Filmmakers, and ABP Computing.

Journey to the South Pacific will also be available on 4K Ultra HD Blu-ray on the same date.

Narrated by Academy Award® winner Cate Blanchett, Journey to the South Pacific will take moviegoers on a breathtaking IMAX® adventure to the lush tropical islands of remote West Papua, where life flourishes above and below the sea. Join Jawi, a young island boy as he takes us on a journey of discovery to this magical place where we encounter whale sharks, sea turtles, manta rays, and other iconic creatures of the sea. Home to more than 2,000 species of sea life, this exotic locale features the most diverse marine ecosystem on Earth. An uplifting story of hope and celebration, Journey to the South Pacific highlights the importance of living in balance with the ocean planet we all call home.

The release will feature 2160p video, a DTS:X soundtrack, and supplements include a making-of featurette, 5 webisodes, and a trailer. 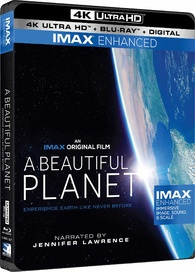 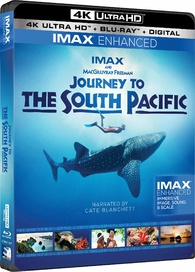