Following an initial announcement last month, Microsoft has now launched Dolby Vision streaming support for Netflix on the Xbox One S and Xbox One X. The feature is now available via an Xbox Insider preview of the 1810 System Update for Alpha Skip Ahead and Alpha users.

Dolby Vision is a proprietary end-to-end High Dynamic Range (HDR) format. The process uses expanded brightness to improve contrast between dark and light aspects of an image, bringing out deeper black levels and more realistic details in specular highlights -- like the sun reflecting off of an ocean -- in specially graded Dolby Vision material. Likewise, Dolby Vision also offers a Wide Color Gamut (WCG), providing a greater range of colors than those found in the previous Rec. 709 color standard. In addition, the Dolby Vision process takes advantage of dynamic metadata, allowing it to adjust brightness levels on a scene-by-scene or even frame-by-frame basis to create a more accurate HDR experience compared to static metadata formats like HDR10. 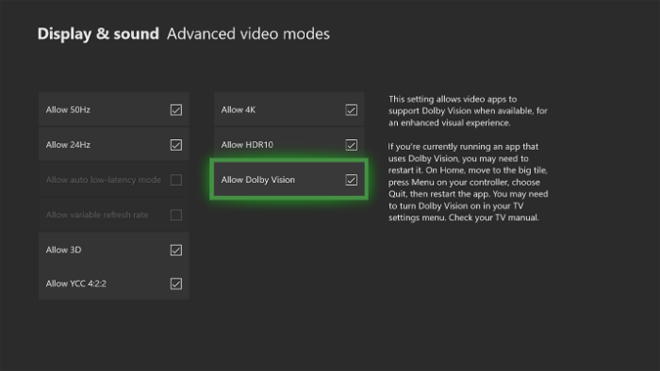 For now, Xbox One S & X Dolby Vision support is limited to Netflix streaming. In order to watch Dolby Vision Netflix content through the console, users will need a display that supports the latest version of Dolby Vision (listed here) and a Netflix Premium subscription. Likewise, users need to enable Dolby Vision playback on their console in the Settings menu.

The Xbox One S 1TB Starter Bundle is now available for $283. Meanwhile, the Xbox One X is now available for $486. In addition, users can now purchase an Xbox All Access Plan which offers 24-month financing for an Xbox One S or Xbox One X console along with a Game Pass and Xbox Live Gold subscription for a monthly price starting at just $22. Finally, a Netflix Premium subscription with 4K Ultra HD and HDR streaming support currently costs $14 per month.