For this edition, we're covering McIntosh's new amps and speakers, the addition of 4K HDR VUDU support to Sony TVs, and the arrival of the Xfinity Stream app on Samsung TVs.

McIntosh has revealed several new additions to its lineup of custom installation products. The collection includes the MI254 and MI128 Power Amplifiers, and a new line of In-Wall and In-Ceiling Speakers.

"We are excited to return to the custom install category with these new amplifiers and speakers," said Charlie Randall, McIntosh President and CEO, referencing the company's previous multi-room offerings. "Many of our traditional home audio products have been used for distributed audio applications by talented CI installers. We are happy to once again offer products specifically designed for custom installation."

The MI254 is a 4-channel amplifier rated for 250 Watts per channel. Meanwhile, the MI128 is an 8-channel outputs amplifier rated for 120 Watts per channel. Both amps feature closed loop digital switching designs and are 2U rack mountable. Likewise, the Class D amplifiers do not require cooling fans to regulate temperature, cutting down on extra noise. Multi-color LED indicators are integrated on the front panel of each unit, and the MI254 also includes two blue McIntosh Watt Meters. When it comes to connectivity, the MI254 uses standard 5-way speaker binding posts while the MI128 uses 2-pole Phoenix style push-in speaker terminals. In addition, the MI128 offers back panel volume controls, 2 digital audio inputs (coax or optical), and channel summing circuits. 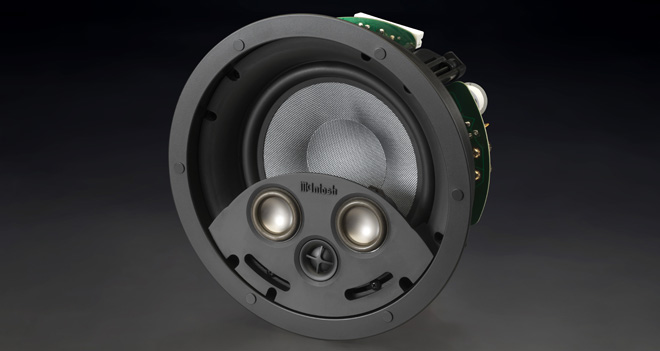 Beyond amps, the company also announced a new line of In-Wall & In-Ceiling Speakers rated for up to 250 Watts of power. The in-wall versions feature a fully enclosed design, and all of the models include new shallow woofers that can fit in a standard 2x4 wall construction. Likewise, all of the units use the same 2" midranges and ¾" tweeters found in McIntosh's XR50 and XR100 home audio speakers.

"The performance of McIntosh home audio products is legendary and goes back nearly 70 years. We're thrilled to bring that level of performance back to the CI channel,” said Dan Wakefield, McIntosh Vice-President of North American Sales.

Exact pricing has not been announced for McIntosh's new MI254 and MI128 Power Amplifiers, and In-Wall and In-Ceiling Speakers, but the lineup is set to launch this fall.

VUDU has announced the release of an updated app for the Android TV platform. With version 4.2.52, compatible 2016 and 2017 Sony 4K Smart TVs can now stream supported VUDU titles in 4K HDR10 and Dolby Vision.

"4K and HDR represent the best possible cinematic experience at home – and we want to be able to deliver that exceptional experience to as many people as possible, across as many devices as possible. So, we’re continuously working to bring Vudu 4K UHD capability to more devices – no matter the platform," said Kristine Lopes, Sr Manager, Product Marketing.

The updated VUDU app will automatically install for users who have auto-update enabled on their Android TV. Otherwise, customers can simply download the update manually through the Google Play Store. VUDU offers a growing collection of 4K UHD titles available in Dolby Vision and HDR10, including select movies from studios like Warner Bros., Lionsgate, Universal, Sony, Paramount, and Disney. High dynamic range content and displays use expanded brightness to improve contrast between dark and light aspects of an image, bringing out deeper black levels and more realistic details in specular highlights -- like the sun reflecting off of an ocean -- in specially graded material. Likewise, HDR titles feature a Wide Color Gamut (WCG), providing a greater range of colors than those found in the previous Rec. 709 color standard.

Comcast has announced the expansion of its Xfinity Stream beta app to select Samsung TVs.

For detailed instructions on how to download and activate the Xfinity Stream app for Samsung TVs, click here.